There has always been a touch of controversy about the 1949-1951 Nash Airflyte. Critics have decried their near cartoon-like styling, while supporters have praised them for their comfort, room, and quiet.

Naysayers have pointed to Nash's tendency to early rustout and poor resale value; enthusiasts brag about the pioneering technology used. While pundits quickly dubbed them the "bathtub" Nashes, the company proudly named them "Airflyte."

The man probably most responsible for the Airflyte series was Nash's Vice President of Engineering, Nils E. Wahlberg. He was a respected automotive engineer, a graduate of the École Polytechnique fédérale in Zurich, Switzerland.

After working at several auto firms -- including Oakland, Maxwell-Briscow, and Packard -- he landed a job with Nash Motors in 1916, working his way to a vice presidency by 1931.

Although Nash engineering was located in Detroit, Wahlberg lived in Chicago in an upscale part of town known as the Gold Coast. From there, he commuted by train to his office at Nash.


"He was a brilliant man," recalls Bill Reddig, who began working in Nash Styling in 1950. "[He] always seemed deep in thought, as if working on an engineering problem. Wally [Wahlberg] would be striding down the hall completely oblivious to everything around him. You could see the concentration in his face. He would sometimes reverse direction suddenly, spinning around without missing a step, as some new thought caused him to reconsider his route."

Wahlberg was fascinated with aerodynamics, streamlining, and the effects of wind resistance on automobiles. He felt that the cars of the future would take into account air drag when they were being designed, using the advantages of aerodynamic styling to ensure a quieter cabin, more stable ride and handling, and improved fuel economy.

All the virtues of clean automotive design were, he felt, waiting to be showcased by any auto company smart enough to use them.

He wasn't alone in his thinking. In 1945, when postwar auto production was just beginning its slow start-up, nearly all of the auto companies took the easy route of simply reintroducing their prewar cars with minimal updating. It was realized by some, however, that life in the postwar era was going to be substantially different.

For one thing, technology had taken a quantum leap forward, spurred on by wartime research for innovative new weapons. In addition, people had changed, becoming more aware of science and technology and the wondrous things that they could bring into their lives.

For many Americans, biplanes had been a marvelous sight in 1937. Just 10 years later, rockets and jet planes were coming into vogue, along with atomic power -- and there was even talk of space travel in the not-too-distant future.

The wartime advances in airplanes were to strongly influence the work of postwar automobile designers. It seemed like the right time to establish a new automotive design frontier.

Nash wasn't going to be left behind -- in sales or technology. Learn about Nash Airflyte development in the next section.


For more information about cars, see: 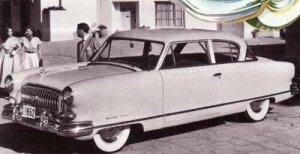