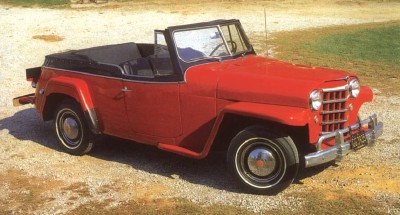 The Jeepster could be had with an interesting two-tone paint option that added a contrasting color around the belt line onto the windshield frame.
©Nicky Wright

Nineteen-fifty brought new front-end styling, the first such change of any consequence since the original Jeep Station Wagon was introduced in 1946. The front fender tips came to a peak -- a potential hazard to pedestrians, but nobody thought in such terms in those days.

The grille was given a modified "V" shape, and five bright metal horizontal bars were added to the nine vertical ribs. There was even a small chrome-plated ornament on the tip of the hood. Such changes were modest enough, but they added a rather attractive touch to the vehicle.

The upscale Station Sedan, never a big seller, was deleted from the 1950 line. But at midyear, the F-head four-cylinder engine became available to buyers of the four-wheel-drive wagon, supplying a welcome dose of vitamins. Sales of the various wagons were up just slightly for the year.

Given the business-like image projected by the Jeep, not to mention its sturdy construction, it was to be expected that Willys-Overland would market a light truck. Once World War II was over they did, and it was released in 1946.

The light truck market was not an unfamiliar field -- the company had a long history of participation in the commercial vehicle market. As far back as 1910, there had been a pair of delivery trucks built on the Overland passenger car chassis.

In 1912, John North Willys purchased a controlling interest in both the Gramm Motor Truck Company of Lima, Ohio, and the Garford Automobile Company of Elyria, Ohio, producer of one-ton and larger trucks. A 3/4-ton utility truck bearing the Willys name appeared the following year; however, it was in reality a Gramm product.

In 1920 the 27-horsepower Light Four series took Overland trucks into the lowest-price field, with the chassis costing only $450. Four years later, a slightly larger 30-horse-power engine was used, and the price was reduced to $395.

Nineteen twenty-seven saw the advent of the company's Whippet light trucks, powered by the 134.2 cubic inch flathead four that would ultimately become the basis for the engine used in the World War II jeep. A six-cylinder companion was also available in both truck and passenger car lines.

The four-cylinder engine disappeared along with the Whippet nameplate in 1932, but the four-banger was resurrected the following year for use in the diminutive Willys 77. A panel delivery was offered that season in addition to the passenger car. In 1935 the line was augmented by a cab pickup.

A stake truck was added in 1938, followed the next year by a walk-in panel delivery. Until World War II brought civilian production to a halt, Willys trucks continued to be available in chassis, pickup, and cab-over-engine panel delivery configurations. The commercials accounted for just over 7 percent of Willys-Overland's production in those days. To learn about Willys trucks from the postwar period, continue on to the next page.