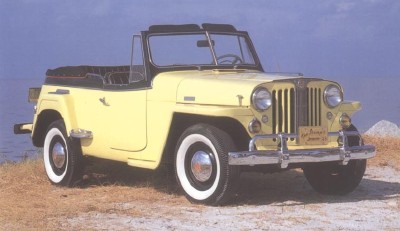 Another one of the styist Brooks Stevens's creations was teh Jeepster, which was released on April 3, 1948.
©Mike Mueller

Mounted on the same 104-inch wheel-base as the prewar Willys Americar, though with substantial modifications to the chassis, the Jeep wagon had none of its predecessor's pretensions to streamlining or graceful styling. Purely functional in design, it was tall and angular. Its simple, flat grille and square fenders were-by no coincidence-very nearly carbon copies of its familiar military forbear.

It had an austere look about it, and only one color scheme was offered at first: deep burgundy on the hood and fenders, with the body done in cream with reddish-brown paneling. The latter cleverly suggested, without actually imitating, the mahogany-and-birch cabinet-shop bodies typically found on the station wagons of that era.

The wagon was dreadfully underpowered. It outweighed the Americar by some 600 pounds; and since it was powered by the same 63-horsepower engine as the prewar sedan, performance suffered badly. Overdrive, offered initially as an option, soon became standard equipment. A good thing, for the car really needed the flexibility of four forward speeds.

But in practical terms, the Jeep Station Wagon had a lot going for it:

Independent front suspension was featured, a first for a Willys-Overland product. Designed by chief engineer Barney Roos, it closely resembled the "planar" suspension that Roos had developed for Studebaker in the mid-Thirties, utilizing a seven-leaf transverse spring in lieu of the more conventional coils. Willys called it "Planadyne."

A two-door configuration was used, with the seventh passenger seated sideways just inside the tailgate. All seats save that of the driver's were removable, permitting the vehicle to serve equally well as a truck or passenger car. The entire floor was flat from the driver's seat back, further enhancing the wagon's utility.

Mechanical components were conventional enough. An 8 1/2-inch Auburn clutch and a T-96 Warner Gear transmission were used. The whooped bevel rear axle came from Spicer, the cam and twin-lever steering from Ross. Hydraulic brakes were by Bendix, and six-volt electrics were by Electric Auto-Lite.

A Willys-Overland advertisement in the Saturday Evening Post proclaimed, "No sedan can match a Station Wagon for all-around usefulness. And no other Station Wagon is so practical for every use as the Jeep Station Wagon -- the first with an all-steel body and top for greater safety and longer service." The ad went on to declare the wagon to be "wonderfully smooth riding on country roads as well as city streets."

Initially, the Jeep Station Wagon was built only in two-wheel-drive form. It sold relatively well: 6,534 units during the last half of 1946, 27,515 in 1947. It's safe to assume that Willys could have sold as many examples as they could manage to build in that postwar "seller's market." But raw materials, especially sheet steel, were in short supply, tending to hobble the aspirations of all the automakers.

Somehow, possibly because of the postwar shortages, a rumor made the rounds that the Station Wagon and other Jeep vehicles were cobbled together, using parts left over from the wartime Jeeps. Brooks Stevens, while affirming that the Jeep "look" had been retained, responded scornfully, "Anyone in their right mind knew that couldn't be. The tread was different, the wheelbase was different, everything about it was different." Read on to find out more about the Jeep Station Sedan.