Jeep's Role in the Korean War 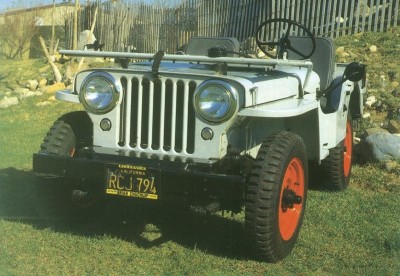 The Jeep CJ-2A was highly successful model; over its five-year life span, 214,202 were built.
©Thomas Glatch

Predictably, Jeeps were once again in the thick of battle. Television fans will recall that the little quarter-tonners appeared as "supporting actors" in nearly every episode of the popular series M*A*S*H. However, the Jeep's tactical role in the Korean War was not always identical to the part it played in World War II.

Though the mostly mountainous terrain of North Korea might have logically influenced the Army to minimize the use of the Jeep, this did not turn out to be the case. New support roles directly related to combat became standard requirements.

In October 1950, the Jeep led the strategic withdrawal from the North when the Chinese entered the war. And once the fighting began along the 38th parallel (the line dividing North Korea and South Korea), the Jeep started to play all kinds of new combat and support roles.

Some Jeeps were equipped with communications gear that allowed them to be employed in forward positions, directing air strikes and observation airplanes. With the heavy movement of refugees from the north, the military police also began to rely more on the versatile Jeep. It could be operated on the paved streets of cities and towns or on the dirt roads of the countryside. The Jeep in Korea proved to be popular as a principal means of transportation for both officers and enlisted men.

The design created by Willys before World War II was still going strong in the postwar years. However, as WWII drew to a close, other postwar plans were being formulated at Willys-Overland. A steady and modestly profitable market had been anticipated for the Jeep Universal. Yet, it was plain to see that for the company to remain viable, the product line would have to be broadened.

With Brooks Stevens in charge of the design team, plans got under way for a postwar passenger car. Those plans were shelved when Joseph Frazer was replaced by Charles Sorensen as company president, then revived under Jim Mooney's leadership, and finally torpedoed when Ward Canaday took the helm once more.

The truth is, Willys might not have been able to produce that postwar sedan, even if Canaday and the board of directors had wanted to. Body manufacturers in the immediate postwar years had all the contracts they could handle.

Brooks Stevens solved the problem neatly and in the process brought forth a whole new concept in automotive design: the all-steel station wagon. Laid out in such a way as to require so little "draw" that even a refrigerator manufacturer could produce the stamping, the Willys Jeep Station Wagon proved to be one of the most influential automobiles ever built, as you'll see by continuing on to the next page.