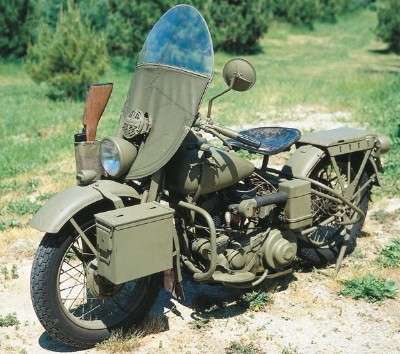 Though rival Indian also supplied motorcycles to the U.S. military during World War II, the majority of those used in battle were Harley-Davidson WLAs.

Wearing the requisite Olive Drab paint, these were 45-cubic-inch V-twins fitted with special equipment for wartime use. Items such as an ammo box, machine-gun scabbard, and rear carrier are obvious; less so are the special "blackout lights" front and rear that projected only a small sliver of light in an effort to avoid detection.

In all, roughly 80,000 WLAs were built, many being sold as surplus after the war. These were often stripped down and fitted with aftermarket parts, fueling the rapidly developing customizing trend.

Rare when new -- and even more so today -- was the Harley XA that was intended for desert use.

In a vast departure for Harley-Davidson, the engine was a horizontally opposed twin -- similar to BMWs of the day. It drove the rear wheel through a foot shift transmission with hand clutch (production Harleys of the day were all hand shift/foot clutch) and a jointed shaft instead of a chain.

A girder-style fork handled suspension chores in front, while at the rear was a "plunger" suspension as used on contemporary Indians. However, only 1000 XAs were built, and none saw service overseas. 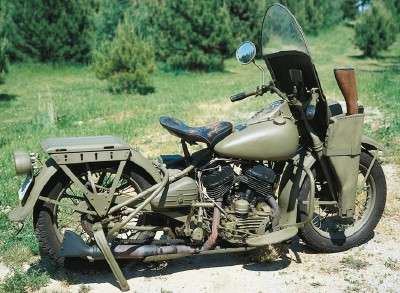 Almost 80,000 WLAs were built for the military.

The WLA used the same fuel tank and gauge as peacetime Harley-Davidsons, but all were painted military olive drab.
On the right is the blackout taillamp used when minimizing light was a combat-zone imperative.
The Harley-Davidson XA model was specially designed for desert warfare but was never used in combat.
In a big departure for Harleys of the day, the XA was equipped with a horizontally opposed twin-cylinder engine and shaft drive.
A special shock-and-spring front suspension was added to the World War II Harley-Davidson XA.