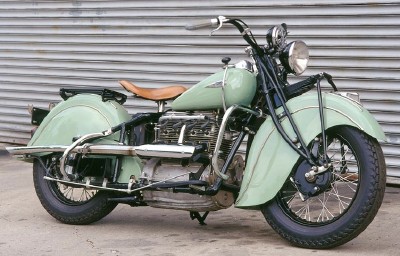 Only about 10,000 Indian 440s were built over the model's 15-year production run. See more motorcycle pictures.

Though expensive for its day, at a price of more than $1,000 when a new Chevrolet car cost $700, the 1940 Indian 440 motorcycle offered a streamlined look, a smooth ride, and an unusual inline-four-cylinder engine.

Indian began offering inline-fours after acquiring the Ace Company in 1927, and the first examples were little more than Aces with red paint and Indian logos on their tanks.

The engine had overhead intake valves and side (flathead) exhaust valves, a configuration known as an F-head. This four-cylinder model remained virtually unchanged until 1936, when the valve layout was reversed in an effort to wring more power from the 77 cubic inches.

Often referred to as the "upside-down Indian," the new engine was a dismal failure. Maintenance was more difficult than before, and overheating became a problem, so Indian reverted to the original design two years later.

The 1940 version, called the 440, adopted skirted fenders that added a more streamlined look. They also added about 36 pounds to an already imposing mass that totaled 568 pounds.

But the 1940 Indian 440 motorcycle boasted not only the typical Indian leaf-spring front suspension but also an atypical coil-spring rear suspension, and, if anything, the added weight made it ride more smoothly than ever.

See the next page for more photos of the 1940 Indian 440 motorcycle. 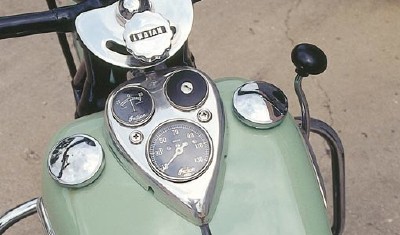 Chromed gauge stage, dual fuel-filler caps, and lever shifter were all classic elements of big motorcycles from the 1930s through the 1950s.

The the 1940 Indian 440 motorcycle used an inline-four-cylinder engine of a design that hearkened back to the late 1920s, but had art-deco streamlined styling.

The already-heavy 1940 Indian 440 gained 36 pounds over its predecessor, making a smoother ride even smoother.
The inline-four F-head engine had overhead intake valves and side exhaust valves.
Skirted fenders helped streamline the 440's look.