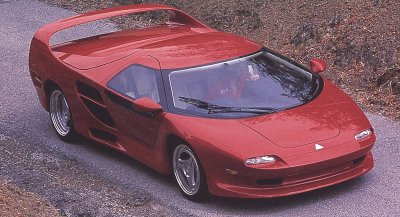 Overhyped fantasy or serious supercar? The Vector M12 is both proof that ideas are one thing, results quite another. It was conceived as “aerospace technology for the street” by Gerry Wiegert, an industrial designer and sometime engineer. A mockup shown in 1976 attracted much attention with its wedgy, edgy styling and promises of 600 hp, composite body, and aircraft-quality construction. Encouraged, Wiegert formed Vehicle Design Force in Los Angeles to realize his mid-engine dream.

Despite scant capital, a running prototype was completed by 1978, and Wiegert showed it everywhere possible to raise money for production, which would be handled by a new Vector Aeromotive Corporation. But funds were hard to come by and the engineering far from perfected. Still, the renamed Vector W8 Twin-Turbo got vast press coverage as a soon-to-be-available Ferrari-beater -- and kept on getting it for more than 10 years.

In 1988, Wiegert took Vector Aeromotive public and raised $20 million. Although serious production finally seemed imminent, only 18 W8s were built and the company was suspiciously broke by 1995. Wiegert was ousted by his own stockholders, and Vector passed to Indonesian-owned MegaTech Ltd., which soon bought Lamborghini and moved Vector to Florida.

Vector had prepared a show car, the Avtech SC (also known as the WX3), and the new operation used this to create a successor model, the Vector M12. British designer Peter Stevens softened the styling and engineers junked the twin-turbo V-8 and costly “aerospace” technology for a Lamborghini Diablo V-12 and conventional construction. New facilities promised truly professional small-scale production at the rate of 150 or so per year.

The Vector M12's cockpit shows off its aerospace origins: it's lavish and futuristic, yet slightly cramped.

Road & Track found the Vector M12 “an elemental car, provoking that corner of the brain that prefers violence over mature negotiation.” Although the test car was a “prototype hack,” the magazine deemed workmanship competitive with anything from Italy. The Vector M12 was more accommodating than the W8, yet no less a straightline rocket. As for handling, the Vector M12 let R&Ts man “throw it any which way I liked. [But] the Vector is a huge car...and just guiding it through corners is a fairly intense achievement.”

So the Vector is finally real after more than 20 years. The only question now is, how long can it last?

To learn more about Vector and other sports cars, see: