A Simpler Approach to a Rear Camera 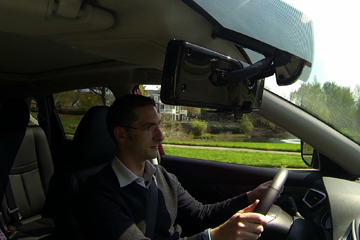 The Nissan Smart Mirror is unlikely to cause distraction to the driver, because it's displayed in an intuitive and familiar way.
(Courtesy of Nissan)

The Nissan Smart Mirror is the first system of its kind, although, as we've mentioned, various vehicle periphery camera systems have been around for a while. Even though vehicle cameras are helpful in a variety of situations, the Nissan Smart Mirror system offers advantages over other camera systems. Its biggest advantage is its simplicity. The additional viewpoints are presented in a way that drivers are already familiar with -- the display looks just like a regular rearview mirror. Drivers don't need to shift their eyes to a screen in the center console, or to a projected image that hovers awkwardly in front of the windshield. The Nissan Smart Mirror is unlikely to cause distraction to the driver, because it's displayed in an intuitive and familiar way. And the switch is right on the mirror itself, within easy reach, so it can be activated quickly. Unlike other rear camera systems, there's no need to fumble through an infotainment system's nested menus or use voice commands just to change the viewpoint.

Nissan developed a new camera specifically for the Smart Mirror system because in early versions of the system, engineers discovered that existing components didn't match the system's unique needs. The LCD monitor had a constraint from the very beginning -- it had to fit inside a mirror housing, which is a different size and shape than a typical console-mounted screen. When images from a standard wide-angle camera were tested on this new LCD screen, they gave a low-resolution image that didn't achieve Nissan's objectives. So Nissan set to work on a narrow-angle camera that would provide the proper size, shape and resolution. Nissan also had to come up with a new LCD screen that had a suitable aspect ratio, so that the images from the camera were displayed in the correct height and width proportions. This enables the Smart system's camera to offer a wider view with no obstructions. Typical visual obstacles, like tall backseat passengers and the car's C-pillars, aren't a problem anymore, and the camera also provides more clarity in bad weather, without additional complications like foggy windows or the kind of slush the rear wiper just can't clear fast enough. Nissan says the camera is also useful in situations with awkward lighting, such as sunrise, sunset and even glare from other cars' headlights.

The actual mirror meets federal regulations in its "normal" form. And when the camera's on, the display looks, for the most part, like the regular mirror. However, an indicator in the upper right corner of the display reminds the driver which view is activated, which helps reduce distractions and potential confusion.