What is car depreciation?

Off the Lot: Why Cars Depreciate 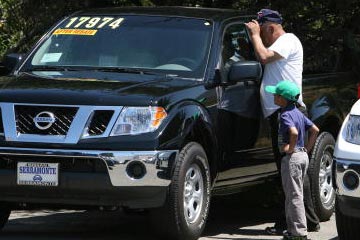 Cars generally lose 15 to 20 percent of their value each year.
Justin Sullivan/Getty Images

Car depreciation is a tough thing for many people to keep in mind while they're shopping for a new or used car, or even when they're just maintaining the car they already own. It seems there are already enough immediate concerns you have to worry about while operating a vehicle. There are questions about car insurance, there's that annoying grinding noise coming from the front right corner and even simply monitoring how hot or cold your engine is running and watching how much gas is in your tank usually seem pretty important, too.

But car depreciation is always there -- in the background. It's even despairingly referred to by some as a "silent thief" because of the manner in which it continuously reduces your return on investment in your car.

The first year tends to be the steepest drop. In fact, the moment a new car is driven off of the lot, depreciation sets in immediately. Why is this?

There are a couple of reasons. Initially, you pay a retail price for a new car: whatever amount the dealer is willing to agree to in order to sell you the vehicle. The moment you're on the road, the car is instantly down to its wholesale price. In other words, whatever amount the dealer would be willing to pay for the car if you made the unfortunate decision to sell it back to him right away. This depreciation is typically thousands of dollars. On top of that, the money you spent on taxes and other licensing fees is gone, too.

So is there anything car shoppers can do to alleviate the pain of depreciation? Well, understanding some of the variables that determine car depreciation helps. Cars that maintain a high demand and are in low supply typically have better resale values. Some brands also depreciate less than others, and of course the condition of a used car will affect its resale value. In the end, it's best to just accept the fact that most cars depreciate and there's not much (if anything) you can do to stop it.

For more information about car depreciation and other related topics, follow the links below.