Do black cars get hotter in the summer? 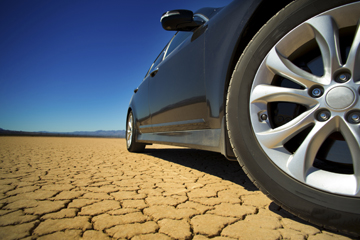 Did you know the state of California once considered banning the sale of new black cars?
(4kodiak/E+/Getty Images)

Did you ever slide into your car on a hot summer day, after it's been parked in the sun for a while, and wonder if there's any way to keep it from becoming a sauna? As it turns out, the same principles that help you make smart clothing choices can help keep your car cool, too (and help the environment, while you're at it).

It's common knowledge that dark colors absorb heat (especially that from the sun's rays) while light colors reflect it. So in 2008 and 2009, the state of California considered banning the sale of new black cars, not out of concern for California residents' on-the-go comfort, but because of the unfavorable environmental effects. It sounded like a bunch of hippie nonsense (and it even got some conservatives, such as Rush Limbaugh, all worked up), but the science behind the idea is sound. A 2011 study by the Berkeley Lab Environmental Energy Technologies Division discovered that white, silver, and other light paint colors do improve a car's efficiency. The study, which pitted a silver Honda Civic against a black one, found that light colored cars reflect about 60 percent of sunlight compared to dark colored cars. This translates to a 2 percent decrease in fuel economy (due to increased air conditioner use), a 1.9 percent increase in carbon dioxide emissions, and a 1 percent increase in other harmful emissions for a black car [source: Owano].

The Golden State lawmakers said that a car that got hotter would require a lot more energy to cool off and to remain cool. This would waste fuel, since it requires extra gas to run the air conditioner, and it would also increase the car's toxic emissions. Reducing the number of black cars on the road could contribute to a reduction in smog and greenhouse gas emissions, which would be a small step toward helping to combat global warming.

Though California didn't pass the law (for the time being), there are steps that can be taken to reduce this effect, even if you already own a black car. The car itself makes a big difference, when variables such as model, size, and shape are taken to account, as well as the number, arrangement, sizes and tint of the windows. A car that's been parked in direct sunlight is going to heat up faster, reach a higher temperature, and then retain its heat longer than a car that's been parked in full or partial shade. Parking in partial shade is much better than no shade at all. The season and weather conditions are also important to consider (although you don't have any control over those, of course). Even on a sunny day, if there's some cloud cover, it'll provide some protection from the heating effect of the sun's rays. And if there's any wind, it might provide a cooling effect. Just being mindful of these additional factors can help your car stay more comfortable in the summer (and, yes, it can help the environment while you're at it).