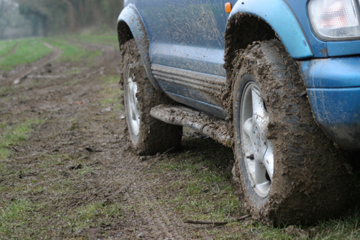 Washing a car can be a chore -- and a costly one at that.
(Creative Commons/Flickr/Sally Kentfield)

Next time you get in your car, take a quick look at the front end. Unless it's been washed very recently, chances are it's covered in bird poop, pollen dust, the remnants of high-speed insect collisions, or, at best, stains and spots from dirty acid rain. Sorry about that.

Traditional paints lack the ability to repel dirt and other contaminants, which leads to the dirt and dullness that we see on practically every coated surface. But in the near future, new cars might come equipped with a new type of finish that's designed to keep road debris, oil, gunk and even water from sticking to and drying on the paint's surface. This new coating, called self-cleaning paint, is hydrophobic, which means it repels water, and oleophobic, which means it repels oil. Not only will these specially painted cars look better on a day-to-day basis, they'll also be protected longer from some of the general, long-term wear and tear that occurs when the car's outermost paint layers eventually degrade from environmental damage. Contaminants like bird droppings and acid rain can build-up and weaken the clear coat and paint layers, which can eventually make the car's underlying metal surfaces more susceptible to rust and other damage. The new self-cleaning paint, however, aims to reduce the impact of such damage.

Eager to get your hands on a new car with self-cleaning paint? Well, the bad news is that they're not ready -- not yet, anyway. But we're going to take a closer look at what inspired this new automotive finish, the technology that makes it possible, and what else has to happen before it's ready for prime time. The paint was developed at the Nissan Technical Centre in the United Kingdom in conjunction with a nanotechnology firm called Nano Labs. Nissan has to thoroughly test the paint before it gets the official approval to be applied to new cars, so researchers at the brand's testing facility in England will spend the summer of 2014 studying how the self-cleaning paint holds up on a Nissan Versa Note. 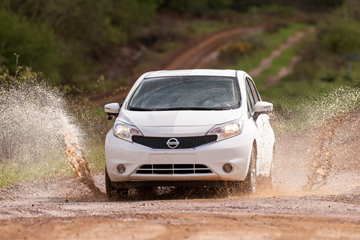 Can we just paint everything this way? 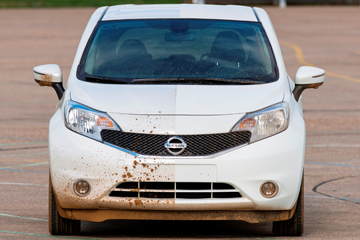 If you let your imagination run wild, it seems like this self-cleaning paint could be useful for all kinds of things. We've already talked about how nano-coatings and other self-cleaning paints can be especially useful for chores such as property maintenance. A graffiti-repelling exterior paint could make a huge difference in a lot of urban landscapes, and highly-trafficked areas would stay a lot cleaner for a lot longer if only they didn't attract dirt and grime.

There are other benefits to nano-coatings, too. Nano Labs says the paint is eco-friendly and also helps materials perform better over time. In other words, the protective qualities of the Nano Labs coating helps prevent damage and degradation, so if you apply the paint to, say, a wooden fence, the wood underneath the paint will stay strong and functional longer than if it was finished with regular paint. Other, more specialized products are already on the market, and new ones will almost certainly be introduced as the technology becomes more advanced. For example, Rust-Oleum, a paint brand that offers a lot of special-purpose paints and coatings to regular consumers, offers a water-repellent spray paint.

As for the automotive industry, it's unclear whether nano-coatings will become a commonplace offering, or if it'll remain exclusive to a single manufacturer for the time being. We won't really know more until Nissan completes its testing in the United Kingdom. Nissan eventually plans to make the paint available across its model range; but, at least for now, it'll be an option rather than a standard feature [source: Lingeman]. The industrial version of the paint can be manufactured in almost any color, and can also be matched to existing colors, although it's not yet clear if Nissan's automotive version will be quite as versatile. If automotive self-cleaning paint is a success, someday we might see a lot less bird poop on a lot more cars.

I enjoyed washing my cars, but I'm kind of weird like that. And even the most enthusiastic DIY detailer doesn't want to touch a car covered in bird poop. But the most intriguing potential for this new paint? If it really does prevent snow and ice buildup, as Nissan claims -- well, that's pretty remarkable. It seems like an unlikely possibility (considering the too-recent memories of our frigid winter) that a paint can prevent cold water from freezing to a cold car. But, we'll see.