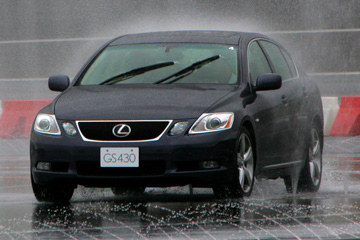 Your car's tires are (arguably) the most important part of the vehicle. The tires, after all, are what transfer the engine's energy to the pavement in a way so that the car can move forward.

Tires are able to do this because of traction. Traction is the resistance between the tire and the ground in reaction to torque being exerted by the wheel axle under engine power.

Simply put, your car's tires transfer energy to the pavement. There's a reason people often invoke the phrase, "This is where the rubber meets the road," when they're referring to moving forward with some undertaking. Because no matter how much horsepower you have, you'll be hard-pressed to use it if your wheels are spinning with no ability to gain traction on the ground.

Keep reading to find out some of the specifics of how tire traction keeps you and your car moving forward. 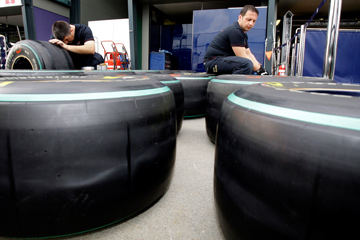 Not all traction needs are created equal. The traction required by the family sedan, for instance, differs markedly from the traction sought by a Formula 1 race car or a Top Fuel Dragster.

The family sedan and other mass-produced vehicles have to function safely in a variety of weather conditions. As a result, the tires on these vehicles have grooves, otherwise known as tread -- the gouged lines that run around the outside circumference of the tire.

Water, oil, sand and gravel are all enemies of good traction, because they allow the wheels to spin without biting the ground and producing the friction necessary to move the car forward. A good tread pattern, suited for the purpose, acts to channel water off to the sides, away from the tire center. In mud or snow, deep treaded tires act almost like a gear, locking onto loose material instead of sliding over it like a typical tire would.

So what about the tires used for several types of race cars? They often lack any type of tread pattern at all. These smooth-surfaced tires, called "slicks," are made from a special rubber compound that's soft, sticky on the track surface and prone to wearing out much, much faster than the consumer-grade tires you buy for your personal car. Their advantage is that they provide tremendous traction. The downside is that they wear out so quickly that they have to be replaced for every race, if not more often [source: Pettit].

Is there a way to tell at a glance which tire will provide the type of traction you need? Find out how tires are rated by reading the next page. 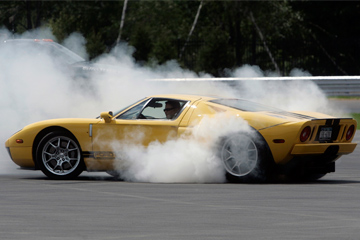 Ari Strauss maneuvers his Ford GT on a "skid pad" where drivers learn how to control a vehicle at Monticello Motor Club in Monticello, N.Y.
AP Photo/Mike Groll

How do you know how much traction your car or truck's tires provide?

If you live in the United States, determining that is pretty straightforward. The Uniform Tire Quality Grading (UTQG) scale indicates a tire's stopping ability on wet surfaces. The better the grade, the shorter the stopping distance on wet pavement when a set of that particular tire is fitted to a vehicle.

The traction grades, from highest to lowest, are "AA," "A," "B," and "C." If a tire is designed for extra traction in mud and snow, you'll also see the designation "M+S."

You should buy the best tire your budget allows and one that fits your driving needs, too. Interestingly enough, if you wanted to buy the worst-graded tire for traction (a tire with a "C" rating) you wouldn't have much to choose from. In fact, according to the U.S. Department of Transportation, of all the tires currently available on the market:

Up next, is there a way to make your regular old tires perform like dedicated winter wheels? 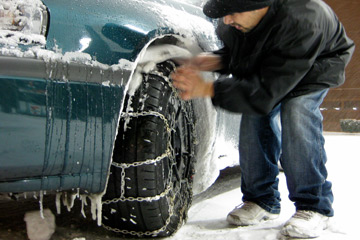 Carlos Santiago-Morales of Lakewood, Wash. checks his tire chains after driving from Lakewood to bring food, water and other supplies to his grandparents in Tacoma, Wash.
AP Photo/The News Tribune, Craig Sailor

In severe weather, lack of traction can either result in the pain in the neck of having your car stuck in a snowdrift or it could result in something as serious as a collision. The critical factor in avoiding either problem is the ability of your tires to bite through the loose and slippery stuff and claw into something solid.

To this end, tire traction enhancers can help. Of course the low-tech, old-school solution that nearly all northerners in the United States have seen, are snow chains. These metal chains fit harness-like around a vehicle's tires and provide additional grab in snowy and icy road conditions.

Newer to the scene are spray-on enhancers that make tires more sticky, and fabric wheel coverings intended for low-speed, short distance driving over snow- and ice-covered roads. Consumer Reports, the impartial consumer products testing magazine, has reported on such devices and concluded that while these traction enhancers may be effective to a degree, your best bet is a set of seasonal snow tires [source: Petersen].

For more information about tires, traction and other related topics, follow the links on the next page.