How the Tweel Airless Tire Works 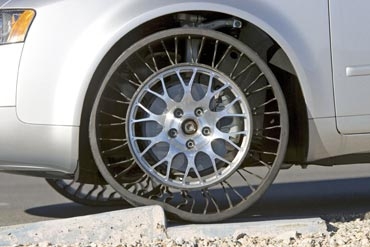 For more than 100 years, vehicles have been rolling along on cushions of air encased in rubber. The pneumatic tire has served drivers and passengers well on road and off, but a new design by Michelin could change all that - the Tweel Airless Tire.

Michelin first announced the Tweel in 2005. The name is a combination of the words tire and wheel because the Tweel doesn’t use a traditional wheel hub assembly. A solid inner hub mounts to the axle. That’s surrounded by polyurethane spokes arrayed in a pattern of wedges. A shear band is stretched across the spokes, forming the outer edge of the tire (the part that comes in contact with the road). The tension of the shear band on the spokes and the strength of the spokes themselves replace the air pressure of a traditional tire. The tread is then attached to the shear band. The Tweel looks sort of like a very large, futuristic bicycle wheel.

The parts of a Tweel Airless Tire.

When the Tweel is put to the road, the spokes absorb road impacts the same way air pressure does in pneumatic tires. The tread and shear bands deform temporarily as the spokes bend, then quickly spring back into shape. Tweels can be made with different spoke tensions, allowing for different handling characteristics.

More pliant spokes result in a more comfortable ride with improved handling. The lateral stiffness of the Tweel is also adjustable. However, you can’t adjust a Tweel once it has been manufactured. You’ll have to select a different Tweel. For testing, Michelin equipped an Audi A4 with Tweels made with five times as much lateral stiffness as a pneumatic tire, resulting in “very responsive handling” [Source: Michelin].

Michelin reports that “the Tweel prototype… is within five percent of the rolling resistance and mass levels of current pneumatic tires. That translates to mean within one percent of the fuel economy” of the tires on your own car. Since the Tweel is very early in its development, Michelin could be expected to improve those numbers. 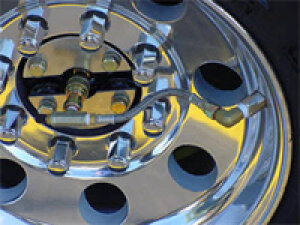 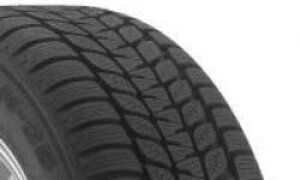