In this article, you will learn how a sequential manual transmission works and why this type of transmission is now appearing on so many high-performance vehicles.

There are three forks controlled by three rods that are engaged by the shift lever. Looking at the shift rods from the top, they look like this in neutral, rev­erse, first and second gear:

The "H" pattern allows you to move the shift rod between the control rods for the three forks and move the rods back and forth.

A sequential manual transmission works the same way. There is still a set of gear selector forks that move collars that engage gears. The only difference is the way the control rods are manipulated. The "H" pattern is eliminated and replaced with a different motion.

In a race car, the motion of the shift lever is either "push forward" to up-shift or "pull backward" to downshift. If you are in a gear and you want to go to a higher gear (e.g. from 2nd to 3rd), you push the shift lever forward. To go from 3rd to 4th, you push the lever forward again. To go from 4th to 5th, you press it forward again. It is the same motion every time. To drop back down a gear, say from 5th to 4th, you pull the lever backward. In European mass-produced automobiles, the shift lever moves forward and backward to shift into higher and lower gears, respectively. In Formula One cars, there are actually two paddles on the sides of the steering wheel, instead of a shift lever. The left paddle up-shifts, while the right paddle downshifts. On a motorcycle, you do the same thing, but instead of moving a lever back and forth with your hand, you move a lever up and down with your foot.

What these motions are doing is rotating a ratcheting drum. The drum looks like this:

You can see that there are grooves cut into the drum. These grooves can do one of two things:

­So, when you move the lever, it rotates the drum one increment (for example, 50 degrees). This rotation causes the rods or forks to move according to the grooves in the drum, changing the gears.

Because of the drum, you have to shift in sequence. There is no skipping, for example, from first gear to third. You must always go through second gear to get to third gear. It is the same when downshifting. The advantage of this system is that shifting mistakes are impossible. You always go to the next gear. 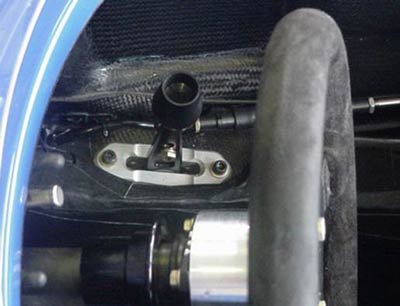 Nearly every race car that has a manual transmission uses the sequential ap­proach rather than the "H" pattern. There are four main reasons for this preference:

The other advantage is that the sequential shift lever takes up less space in the race car cockpit. You only need space for the forward/backward motion of the lever, not left/right.

Nearly all race transmissions use the sequential shift approach. The drum is rotated manually by a lever in the cockpit, or it is rotated by solenoids, pneumatics or hydraulics that are activated electronically. In the electronic case, the driver has a pair of paddle switches on the steering wheel to control the mechanism and never has to move his/her hands from the steering wheel.

For more information on sequential transmissions and related topics, check out the links that follow.