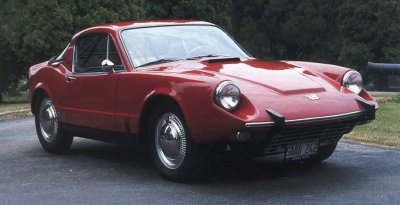 The Saab Sonett II maintained Saab's reputation for reliability and simplicity, but wrapped it up in a sportier package than previous models.

The story of the Sonett II is the story of Saab itself. The name SAAB stands for Svenska Aeroplan AB, which, as you might guess, was founded to build aircraft for the Swedish air force. That was in 1937. When military orders dried up in the wake of World War II, the firm decided to bolster its business with a very different product: automobiles.

What emerged was a streamlined but dumpy-looking little fastback sedan with front-wheel drive (a postwar pioneer in this respect) and a German DKW-inspired two-stroke twin for power. It went on sale in 1949 as the Saab 92. (Like Porsche’s, Saab projects have numbers, be they cars or airplanes.) Later models had three-cylinder two-strokes, but remained two-door sedans or three-door station wagons.

Humble they may have been, but these early Saabs proved quite worthy: solid, reliable, and able to cope easily with the harsh Swedish winters for which they were designed. Not surprisingly, they began to do well in European rallying, so the idea of a sporting model wasn’t as far-fetched as it might have seemed.

The Saab Sonett II's inline 3-cylinder engine sat well back under the hood, adding to stability.

Saab’s first move in this direction was the Sonett I of 1956-57, a fiberglass-bodied two-seat roadster based on standard production components. Only a handful were built though, all essentially prototypes, and the company wouldn’t try again until 10 years later.

This second effort was somewhat more successful. Internally designated Saab 97 and sold as the Sonett II, it employed rather modest coupe bodywork, again of fiberglass, over the floorpan and running gear of the latest Saab 96 Monte Carlo sedan. That meant a 60-horsepower 841-cc two-stroke three, front drive, front disc brakes, and a 4-speed manual transaxle with Saab’s usual column-shift control. Styling was smooth if a bit odd, with a long, pointy front, prominent hood bulge, fixed compound-curve backlight, and abbreviated tail. The design came from Malmo Aircraft Industry (MFI), while bodies were initially built by the Swedish Railway Works (ASJ) in Arlov, many miles from any other Saab production facility. As on the Austin-Healey Sprite and Jaguar E-Type (see entries), hood and front fenders were a single-hinged unit.

Like other Saabs, the Sonett II didn’t have much performance at first. The two-stroke three had reached the end of its development by the time sales began in 1966, and was hard pressed to cope with a 1565-pound curb weight. So although handling and durability were of a high order, only 60 Sonnetts were built that first year, followed by 455 in 1967.

That was no way to make money, so the 1968 model received the same engine transplant applied to other Saabs that season: the narrow-angle 1.5-liter V-4 from the German Ford Taunus. Horsepower rose by only five (though the rating was likely conservative), but superior torque greatly improved low-speed tractability. Even better, the V-4 acted and sounded like a “real” engine, a welcome change from the quirky, poppity two-stroke.

Known as the Saab Sonett V-4, Saab’s revised sportster was sold in the U.S., though on a very limited basis. One reason is that many showroom browsers found it difficult to take the car seriously. Saab advertising didn’t help, defining “Sonett” as “Swedish for ‘expensive toy.’ You can find it in the toy department.”

Nevertheless, this was a very nimble, fun-to-drive little car, with decent luggage space (but no external access) and passenger room, plus the practicality of front-wheel drive and that rustproof body. Though not as well balanced as the two-stroker, the V-4 was far more “sloggable,” and its 100-mph performance made it far better for a wider range of driving conditions.

Saab would have loved to have sold more Sonett IIs in the U.S., but dumpy looks and competition from established sports cars like MG and Triumph continued to limit demand. Production ended in 1970, but only because Saab had something better: the new Saab Sonett III.

To learn more about Saab and other sports cars, see: