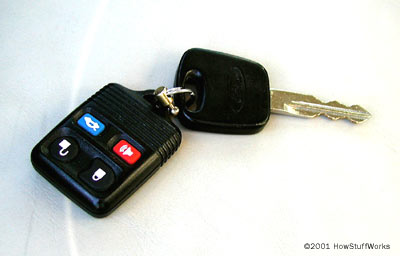 Key fobs such as this one activate the power door lock mechanism. See more pictures of car gadgets.

Between the keypads, keyless entry systems and conventional locks, some cars today have four or five different ways to unlock the doors. How do cars keep track of all those different methods, and what exactly happens when the doors unlock?

The mechanism that unlocks your car doors is actually quite interesting. It has to be very reliable because it is going to unlock your doors tens of thousands of times over the life of your car.

In this edition of HowStuffWorks, we'll learn just what's inside your door that ma­kes it unlock. We'll take apart the actuator that does the work, and then we'll learn how the lock can be forced open. But first, let's see how the car keeps all its signals straight. ­ 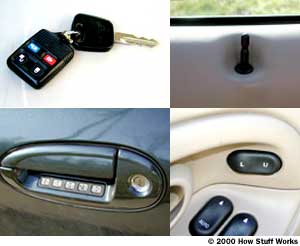 Here are some of the ways that you can unlock car doors:

In some cars that have power door locks, the lock/unlock switch actually sends power to the actuators that unlock the door. But in more complicated systems that have several ways to lock and unlock the doors, the body controller decides when to do the unlocking.

The body controller is a computer in your car. It takes care of a lot of the little things that make your car friendlier -- for instance, it makes sure the interior lights stay on until you start the car, and it beeps at you if you leave your headlights on or leave the keys in the ignition.

In the case of power door locks, the body controller monitors all of the possible sources of an "unlock" or "lock" signal. It monitors a door-mounted touchpad and unlocks the doors when the correct code is entered. It monitors a radio frequency and unlocks the doors when it receives the correct digital code from the radio transmitter in your key fob, and also monitors the switches inside the car. When it receives a signal from any of these sources, it provides power to the actuator that unlocks or locks the doors.

Now, let's take a look inside an actual car door and see how everything is hooked up.

Inside a Car Door 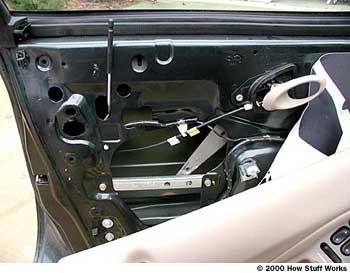 ­ In this car, the power-door-lock actuator is positioned below the latch. A rod con­nects the actuator to the latch, and another rod connects the latch to the knob that sticks up out of the top of the door.

Inside a car door

To unlock the door, the body controller supplies power to the door-lock actuator for a timed interval. Let's take a look inside the actuator.

This actuator can move the metal hook shown in this photo to the left or right. When mounted in the car, it is vertical, so the hook can move up or down. It mimics your motions when you pull the knob up or push it down.

­­­The power-door-lock actuator is a pretty straightforward device. ­

This system is quite simple. A small electric motor turns a series of spur gears that serve as a gear reduction. The last gear drives a rack-and-pinion gearset that is connected to the actuator rod. The rack converts the rotational motion of the motor into the linear motion needed to move the lock.

One interesting thing about this mechanism is that while the motor can turn the gears and move the latch, if you move the latch it will not turn the motor. This is accomplished by a neat centrifugal clutch that is connected to the gear and engaged by the motor.

Centrifugal clutch on the drive gear

­ ­If you have ever locked yourself out of your car and called the police or AAA to help you get back in, you know that the tool used is a thin metal strip with a flat hook on it. From this article you can now see how this strip works.

A simple vertical motion from either the knob on the door or the power-lock actuator is all that's needed to turn the lock and open the door. What the officer is doing with the metal strip is fishing around until he or she hooks onto the point that the knob and actuator connect to. A quick pull on this point and the door is unlocked!

For more information on power door locks and related topics, see the links on the next page.