Porsche passed a historic milestone in July 1996 with production of its one-millionth car but had little time to celebrate. The company was busily preparing for the European launch of its important new entry-level model, the mid-engine two-seat Boxster convertible, followed in 1998 by the first clean-sheet 911 since the original.

Americans, as usual, would endure a year's delay in each case, which only whetted buyer appetites, encouraged by a stream of breathless preview reports from "buff" magazine European correspondents.

Yet the delayed gratification had no affect on sales in Porsche's most important market. Indeed, despite an unchanged line of little-changed cars, North American sales almost doubled in calendar '97 to 13,731 units, the highest 12-month tally in nine years. Helped by the Boxster, Porsche did even better in 1998 with 18,189 sales.

The 1997 and 1998 North American models ended the fairly short run of the 993-series and the very long run of air-cooled Porsches. Traditionalists mourned both even as Porsche observed its 50th birthday in 1998, but what better place than the half-century mark for a legendary automaker to begin a dynamic new era?

Typical of "run-out" cars, the last North American 993s had little new to offer. The only change for '97 was the addition of high-intensity Litronic headlamps as a first-time option; even base prices stood pat. The Porsche Turbo then went MIA, suggesting something big was afoot.

Otherwise, the '98 lineup was more of the same, except that the Carrera coupe was ousted for a Turbo-style wide-body version called Carrera S. Its many special trim bits prompted lots of kidding from Car and Driver, but poseurs everywhere delighted at the base price: nearly $10,000 lighter than for the lookalike C4S (still at $73,000 base).

Finally, just when it seemed the air-cooled era might pass quietly, Porsche issued a fitting finale in a new Turbo S coupe. Announced in mid-1997, it was both a farewell tribute and a 50th anniversary present from Zuffenhausen.

Upgrades over the "normal" Turbo were extensive. Start with an engine muscled up to 424 horsepower, an extra oil cooler to keep it on call, and a four-pipe exhaust system to help it breathe deeply. The transmission and clutch were suitably beefed up. Ride height dropped 0.6-inch for better "aero" and tighter cornering, while a thicker front-strut crossbrace enhanced both handling and rigidity.

With all this, the Turbo S was even more extroverted than the hard-to-miss standard issue, and limited-edition cachet made it a fast sellout despite a stiff $150,000 entry fee. That price and the low planned production meant no seat time for most road-testers, but Britain's Autocar wheedled a drive.

Despite a few scary close encounters with hedgerows in rainy weather, the magazine pronounced the Turbo S "the ultimate 911." There was special praise for the powerful brakes -- "There are less effective brick walls" -- and, of course, the always prodigious grip. But the foul weather precluded track tests, so Autocar could only parrot Porsche's own performance figures. And those numbers suggest the S was little, if any faster than the 400-horsepower Turbo.

As for production, we don't have an official figure, but we do know the U.K. was allotted just 33 cars, the U.S. only 168, so the likely total was no more than 500. Comedian and Porschephile Jerry Seinfeld managed to get one, but many other wealthy swells must have been disappointed. 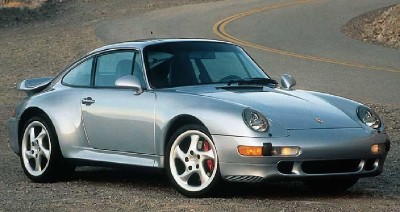 A special nose with large air intake was unique to 993-series Turbos like this '97.

For Porsche prices and reviews from the auto editors of Consumer Guide, see: