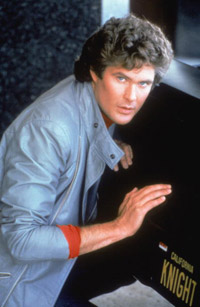 According to Popular Mechanics, the Trans Am used for the original "Knight Rider" series was a front engine, rear-wheel drive two-door coupe. In the show's universe, the car cost an estimated $11,400,000 to make, and the imaginary specs the car had in 1982 clearly show that. The engine in K.I.T.T was a special "Knight Industries turbojet with modified afterburners," and the transmission was an "eight speed microprocessor turbodrive with autopilot" (which allowed the car drive without any passengers). K.I.T.T. could accelerate from 0 to 60 mph in an astounding 0.2 seconds with powerboosters, while braking from 70 to 0 mph only took 14 feet. Many believe the supercar rivaled current concept cars like the Aptera with a fuel efficiency of about 200 miles per gallon.

The original K.I.T.T. also had a few tricks up its sleeve -- however primitive or silly they might seem -- that the new one doesn't. For those tricky climbing situations, the car could use a grappling hook, and fighting off enemies in front and behind was easy with a flame thrower and an oil slick system.

What about the actual Pontiac Trans-AM used to film the "Knight Rider" series in 1982? By today's supercar standards, it would probably be left in the dust -- its V8, 5.0 liter, 145-horsepower engine is no Lamborghini Reventon. On the other hand, the car does deserve some kind of honorary award for out-performing the entire cast of the show.

For lots more information on "Knight Rider," K.­I.T.T. and other things automotive, click over to the next page.

Since March 2007, one of the four cars used to film the original "Knight Rider" has been up for sale in Dublin, Calif., for $150,000. The current owner, Tim Russo, bought one of the models in 1997 and spent years searching for various parts and restoring the vehicle to its former glory. This K.I.T.T. comes with two working video screens on the dashboard, buttons that read "ski mode," "micro jam," "oil slick" and "eject" (none of these actually work, unfortunately) and, most importantly, the fully functional, flashing red light on the hood of the car.

Despite all of these restored perks, the car won't even be able to drive legally in the United States, since it doesn't meet emission standards -- once purchased, K.I.T.T. will most likely end up in a museum or a private collector's garage [source: BBC News].