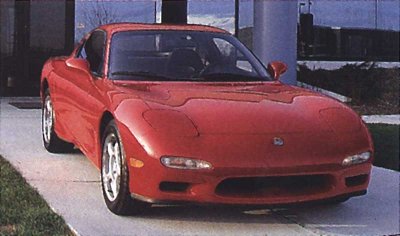 stretched tight over the tires and cockpit.

Purity of purpose is as rare in a modern automobile as it is in modern life, which is why the third-generation, 1993-1995 Mazda RX-7 was a great sports car.

Mazda had followed the successful first-generation RX-7 with a plumper model dimmed by Porsche 924-derived styling. It was a more forgiving handler than the original and, with the addition of a 182-hp turbocharged rotary and convertible body, was faster and flashier. But it wasn’t as sincere. Sports car or boulevardier? Mazda couldn’t decide.

There was nothing ambiguous about the taut little two-place coupe that replaced it for 1993. Mazda went back to basics with a simpler, lighter, more potent, more entertaining RX-7. It had nothing in common with the 1986-1992 series except rear drive and the 1.3-liter Wankel. The Japanese automaker’s California design team under Tom Matano had fashioned a genuine original, an organic form shrink-wrapped around tires, engine, and cockpit.

Compared with its predecessor, the new Mazda RX-7 was 1.4 inches shorter, 1.4 inches lower, and 200 lbs lighter. Weight savings were everywhere -- even the spark plug wires were the shortest possible length. The suspension was classic four-wheel double wishbone. The instruments clustered around the tachometer and, in time-honored sports-car tradition, were ringed in chrome.

The 13B rotary returned, but with two turbochargers acting in sequence; one provided boost at low- to medium-engine speeds, the other spooled up for high-rpm assaults. Lots of power and minimal mass is the foolproof formula for excitement, and the rotary rocket did not disappoint. Acceleration was swift, its moves were scalpel sharp. "It feels connected to the driver’s senses," said Road & Track.

The Mazda RX-7's ovoid portals led to a cabin of cozy dimensions, but handling was sharp.

But there were flaws -- a slight hesitation as the turbos transitioned; an interior of petite dimensions and ordinary materials; unreliable engine electronics; and an unduly stiff ride, particularly with the gymkhana-ready R1 option. Price was an obstacle, too -- $31,300 to start -- and insurance rates were prohibitive for many. Sales languished. Quality improved for ’94, the suspension was softened, and a passenger-side air bag joined the driver-side restraint.

To learn more about Mazda and other sports cars, see: