The Decline of Lincoln 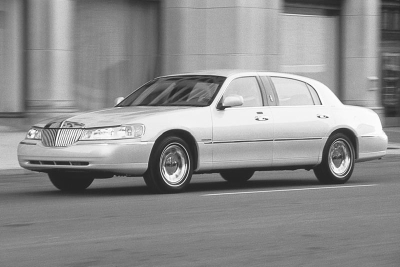 In what must have been an "uh-oh" moment for Lincoln planners, Town Car sales were flat for 1998 despite heavy surgery that replaced dated boxiness with a massive rounded form. One wag termed it "a bloated copy of [a 1950s] Mark IX Jaguar" -- rather damning given that Lincoln and Jaguar were now corporate cousins. At least the restyle trimmed a helpful three inches from overall length and some 200 pounds from heft. Engine retuning added 10 horses to the Executive and midlevel Signature models. The dual-exhaust V-8 returned with 220 bhp for the top-line Cartier and a $500 Signature Touring Package. Traction control, leather upholstery, and a 40/20/40 split front bench seat were all newly standard.

The addition of front side airbags was Town Car's main news for 1999. The 2000s were mostly reruns, but the following year brought more power, with the base V-8 hiked to 225 bhp, the dual-exhaust version to 240. Also new for 2001 was the Cartier L, a "stretch" job of the sort limousine builders had been doing for years. The stretch here was a modest six inches, all in the wheelbase to provide king-size rear leg room. Rear doors were elongated to match. Fittingly, in a literal sense, Lincoln hired the towering Shaquille O'Neill of L.A. Lakers basketball fame to introduce the L to the press.

Another extensive makeover occurred for Lincoln's 90th-anniversary year and Ford Motor Company's centennial. In a modest nod to new-century expectations, the 2003 Town Car received more coherent styling via new sheetmetal at each end, plus a stiffer frame, revised suspension, and more precise rack-and-pinion steering to replace recirculating ball. Brakes added a "panic assist" feature that automatically kicked in full hydraulic power on a rapid push of the pedal, even without full force. Front side airbags and 17-inch wheels became standard, as did a dual-exhaust V-8 with 239 bhp, up 14 horses. Rear obstacle detection also joined the features array. Lincoln hoped all this would prompt luxury-class ­buyers to put Town Car on their short lists along with the Lexus LS 430 and comparable big German sedans. But though the '03s were the most roadable Town Cars yet, they did nothing to change the model's yesteryear image, and sales kept sliding through 2005.

Lincoln was now struggling to redefine itself for a new era. If Town Car and "American luxury" no longer ensured ­profits, what would? Affluent younger buyers hooked on high-status imports mostly associated Lincoln with the Town Car, which made a fine limousine but wasn't something they'd want in their driveways. Lincoln needed to win over such folks, who now dominated the luxury market, but how? These were tough questions, and finding answers was complicated by mounting problems and shifting tactics in Dearborn.

As one telling example, Ford decided to move Lincoln and Mercury sales and marketing staff to the company's Irvine, California, campus in July 1998. Southern California, so the reasoning went, was a hotbed of automotive talent and innovation; planting two wilted brands in such fertile soil would surely help them blossom anew. Three years later, L-M was folded into the Premier Automotive Group, a Southern California-based subsidiary formed in 1999 as an umbrella for Ford's high-end marques: Aston Martin and Jaguar, purchased in the early '90s, and newly acquired Volvo and Land Rover.

But it fast became clear that Lincoln and Mercury were out of place at PAG, each beset by daunting challenges that couldn't be resolved by simply soaking up "SoCal" culture. Accord­ingly, both brands were reabsorbed into Ford North American Oper­a­tions in April 2002; personnel were ordered back to Michigan seven months later. One top executive said it was only "good business sense" for L-M "to co-locate with Ford Division" again, but many thought the explanation lame.