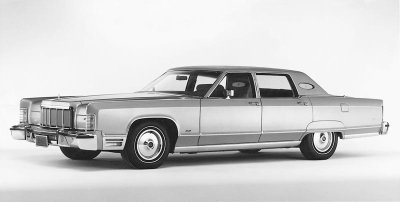 Throughout the 70s, Lincoln reverted to its longer-lower-wider formula, as evidenced by the 1975 Lincoln Town Car.

The 1970 Continentals carried new bodies on a "torque-box" chassis inspired by Mercury, with coil-link rear suspension (Lincoln's first since 1959), an inch-longer wheelbase and wider rear track. Styling was freshened with hidden headlamps, a more prominently bulged slat grille, plus ventless front-door glass, concealed wipers, and full-width taillamps -- all popular period features. Less obvious were wider doors, with the rears now front-hinged on sedans, and a slightly smaller fuel tank (though still ample at 24.1 gallons). The hardtop, again advertised as the Coupe, gained a sweeping roofline with huge C-pillars that made over-the-shoulder vision dodgy. The powertrain was essentially a carryover. Prices were still about what they'd been back in 1961: $5976 for the hardtop, $6211 for the sedan.

This heavier, bulkier-looking Lincoln continued through 1974 with relatively few changes -- most dictated by federal, not market, requirements. Prices did change, pushed by inflation past $7000 for 1971 and a little beyond $8000 by 1974. Horse­power numbers changed, too, but only because more-realistic SAE net measures replaced gross figures after 1971. Thus, the big 460-cid ­V-8 suffered a paper drop from 365 gross bhp to 212/224 (Mark/Continental). An even bigger Continental arrived for '75 with a fractionally longer wheelbase and some eight inches added to overall length. Curb weight, though, was ­slightly lower at around 5000 pounds.

Continental styling remained resolutely blocky and formal throughout the '70s as Ford designers sought to maintain a family resemblance with the Mark. Sales moved up smartly for 1972 -- to nearly 95,000, including Marks -- then to a record 128,000-plus for '73. A decline followed the energy crisis touched off by the OPEC oil embargo, but it was only temporary, and Lincoln rallied along with most other big Detroiters in 1975. Output was more than 190,000 by '77, a new Lincoln high, though still only slightly more than half of Cadillac volume.

Longer-lower-wider was the formula that had traditionally worked well for luxury makes, and it worked well for Lincoln with the new Continental Mark IV of 1972. Sales nearly doubled over those of the '71 Mark III and would average 50,000 or so each year through the final 1976 models. Remarkably, the Mark IV offered less passenger room than the III and was predictably thirstier and less agile. It, too, shared a basic structure and wheelbase (now 120.4 inches) with the concurrent Ford Thunderbird, but it wasn't immediately apparent.

Lincoln enjoyed good success with the Continental Town Car option. The 1970 package consisted of special leather inserts and vinyl bolsters for seats, woodlike panels on the backs of the front seats, deeper cut-pile carpeting and a soft nylon headliner, all color-keyed in a choice of five hues. For 1971, Lincoln offered an extra-special Town Car with dash and front-fender nameplates plus a set of keys and door-mounted owner initials all done in 22-carat gold -- which made for a Golden Anniver­sary Continental to celebrate Lincoln's 50th birthday. For 1972, the Town Car became a Continental submodel. The hardtop got the same treatment for 1973 to become the Town Coupe.

There was little new for '74. Heavier bumpers sprouted at the rear to match the beefier front units adopted the previous year per federal mandate, and the Mark added a brace of Luxury Group interior/exterior options. The revamped big-car line for '75 exchanged pure "hardtop styling" for "opera window" roof­lines with fixed B-posts and heavily padded vinyl coverings. These ­models continued largely intact through 1979.

For 1977, the Mark IV was restyled inside and out to become the Mark V, distinguished by a crisper, lighter appearance. And appearances were not deceiving. Though it rode the same wheelbase and was little changed mechanically, the Mark V weighed some 500 pounds less than the Mark IV. It also ­boasted 21 percent more trunk space -- which seemed like a large gain only because the IV had so little. Engineers paid belated attention to fuel economy by standardizing the corporate 400-cid V-8 with 179 net bhp. The old reliable 460-cid V-8 continued as an option except in California, where it could no longer meet the state's tougher emissions hurdles.