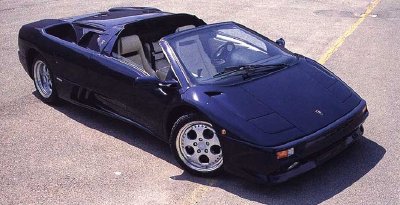 The Diablo was Lamborghini’s follow-up to the Countach -- a hyper exotic for a changed world. No longer could a supercar get by merely on irrational styling and unfettered performance. It had to satisfy safety and emissions standards, even offer a measure of refinement. The Lamborghini Diablo provided all this and more.

In balancing these demands, the Lamborghini Diablo came closer to fulfilling founder Ferruccio’s dream of a do-everything GT than any other midships Lamborghini. That’s not to suggest this car is tame. It’s named, after all, for both a fighting bull and the devil himself. “In the grand and romantic tradition of the Italian Supercar,” said Motor Trend, “the Diablo is a thundering, fuel-sucking exercise in excess.”

Larger, wider, heavier, and more aerodynamic than the Lamborghini Countach, the Lamborghini Diablo’s 202-mph top speed made it the planet’s fastest car upon its unveiling in 1990. The basic design, by Marcello Gandini of Miura and Countach fame, retained such Countach elements as asymmetric rear-wheel cutouts and scissor doors, but had a fresh cab-forward silhouette and dramatic plunging A-pillars.

This was the first Lamborghini developed under Chrysler, which furnished computer-design expertise and also softened the lines of Gandini’s original styling. The body was a new mix of steel, aluminum, and composite panels. The space-frame chassis was evolved from the Lamborghini Countach’s, but was stronger and exceeded worldwide crash standards.

The Lamborghini Diablo's 48-valve 5.7-liter V-12 has 492 hp, but some editions have had 525.The Roadster also employs a permanently engaged all-wheel-drive system to help keep this cocky spirit under control.

In 1994, off came the VT hardware, plus 386 lbs of other “amenities,” for the 30th Anniversary Special Edition Diablo, a $257,000, 525-hp, 206-mph demon. As an encore, Lamborghini in 1996 delivered the world’s fastest four-wheel-drive convertible, the VT roadster with a removable carbon-fiber roof panel.

In 1994, Chrysler sold out to MegaTech Ltd., an Indonesian firm that seems intent on keeping Lamborghini vital. There’s a planned successor to the Lamborghini Diablo, so the raging bull will continue aboard a mid-engine supercar, the breed Lamborghini originated and insists on perpetuating.