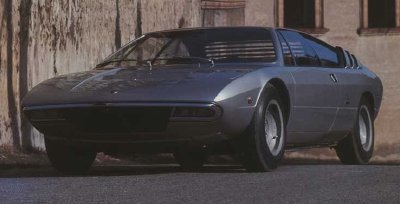 The front profile of the Urraco shows off its distinctive grille and its louveredback window, a signature of designer Marcello Gandini.

When Ferruccio Lamborghini was quizzed about his ambitions in the mid-1960s, he’d invariably reply: “To build a small car.” Not small like a Fiat, you understand, and not cheap. Rather, a compact supercar. Ferruccio finally realized this dream in 1970 with the mid-engine Lamborghini Urraco, a sort of half-pint Lamborghini Miura that represented a major gamble for his tiny company.

Whereas production Lamborghinis had heretofore been powered by 60-degree quad-cam V-12s, the Lamborghini Urraco had a small 90-degree V-8 with only one camshaft per cylinder bank, plus an equally new transaxle and bodywork.

In short, this was Sant’Agata’s reply to the Dino 246 GT and Porsche 911. Thanks to Italian pride, however, the Lamborghini would one-up the “budget” Ferrari, with 2 + 2 instead of two-seat accommodation, a V-8 instead of a V-6, and Bertone rather than Pininfarina styling.

Of course, the German car, produced in much higher volume by a much larger company, could -- and did -- way outsell the Italians. But the Urraco was further handicapped by a two-year delay in customer deliveries, which reflected -- and likely aggravated -- Sant’ Agata’s mounting problems that would come to a head by decade’s end.

As “son of Miura,” the Lamborghini Urraco used a fabricated pressed-steel chassis with welded-on bodyshell and mounted its engine/transmission package transversely behind the cockpit, ahead of the rear wheels. The usual all-disc brakes and all-independent suspension were on hand, but the latter used MacPherson-strut instead of double-wishbone geometry.

Developed under chief engineer Paolo Stanzani, the new single-cam V-8 was less sophisticated than the Lamborghini V-12, though it did have cogged-belt cam drive. The initial 2.5-liter version was the same size as Ferrari’s then-current Dino V-6 but delivered 30 more horsepower.

Named for a breed of fighting bull, the Urraco was yet another new Lambo designed by Marcello Gandini. He apparently made little effort to disguise the mid-engine layout, with a short hood and a longish wheelbase on a compact 167.3-inch-long structure. His favored “signature” -- a louvered engine bay/rear window area -- was in evidence, along with a pointy front bearing hidden headlamps.

The Urraco's interior was aesthetically pleasing, yet buyers shied away from its poor ergonomic layout.

The Lamborghini Urraco might have given the Dino a good sales fight were it not for several problems. Despite fine performance (up to 143 mph) and real exoticar character, some buyers didn’t see it as a “real” Lamborghini. And there were inherent design flaws: poor outward vision, patchwork ergonomics, an odd driving position, mediocre refinement.

Worse, a good bit of initial interest undoubtedly evaporated during the long delay in getting cars to customers. Even then, the Lamborghini Urraco didn’t seem fully developed somehow. Quality and reliability problems surfaced early, and were publicized as much as the increasing financial and labor problems that prompted rumors of Lamborghini’s imminent demise. With all this, a good many buyers likely shied away from the Lamborghini Urraco.

Hoping to recover, Lamborghini brought a pair of improved Urracos to the 1974 Turin show. The big news was the P300, carrying a stroked, 3.0-liter V-8 with new twincam heads designed to counter the power-sapping effects of required U.S. smog gear and establish the Lamborghini Urraco as a genuine Lamborghini.

Output rose to 265 bhp (up from a 180-bhp low in U.S. form) and so did performance, though “crash” bumpers and other weight-adding safety equipment cut into both. Even so, driveability remained a problem, and none of the car’s other faults were really remedied. The other newcomer was a downmarket 2.0-liter version, the P200, a single-cam “tax break” special for domestic consumption only.

With fewer than 780 examples in six years, the Lamborghini Urraco was not the success it could have been or that Lamborghini needed. When production ended in early 1979, Ferruccio Lamborghini had long since sold out, leaving his company to flounder in a sea of rumors and reorganizations that almost sank it.

But all would not be lost. The Lamborghini Urraco’s basic design would survive in the short­lived Lamborghini Silhouette and the more successful Lamborghini Jalpa, both of which would help keep Lamborghini afloat.