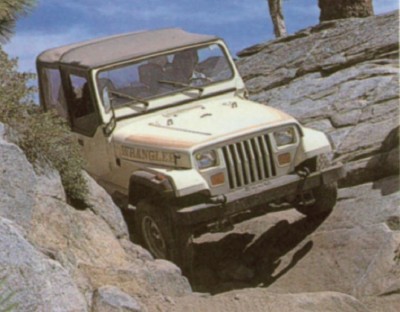 One of the most difficult parts of Jeep four-wheeling is traveling over rocks.
©Chrysler LLC

There is satisfaction to be found in more sedate off-roading exercises, as well, and Jeepers appreciate gliding gently down a forest path beneath a canopy of leaves -- especially in an open CJ or Wrangler. If there is one spot that embodies the challenge, exhilaration, and spectacle of true Jeeping, it is a section of the Rubicon known as the "Big Sluice."

The Sluice is actually a dried waterfall, a chute-like descent amid pitiless granite boulders -- with a dangerous 45-degree turn thrown in for good measure. It is only 30 to 40 yards long, but it can seem to stretch for miles. One driver negotiating it paused to glance at his inclinometers. His Wrangler was tilted left 35 degrees and tipped forward 55 degrees.

"Those who've driven the Sluice insist it's the worst single trail open to vehicles they've ever seen," declared Mark Williams in Four Wheeler magazine. "The margin for error is very small, and for those who don't give the terrain the respect it demands, the winch cable waits...

"On a hillside next to the run," Williams wrote, "where the granite provides bare spots in between the scrub, people sit [after already having done their time on the rocks] and prepare to watch the next victim. . . . [They're] calling, pointing, cheering, supporting . . . all watching the vehicle directly below negotiate the tricky boulders and sharp drops. The towering trees provide shade and cool breezes, but it seems that every driver who passes through breaks a sweat in the first few moments."

"The ideal Jeep would have a hinge in the middle for this section," observed Car and Driver's Pete Lyons.

The Sluice is the exclamation point to a 7.5-mile leg of the Rubicon that can take up to 14 hours to traverse. Veterans say the average speed is minus two mph. But the Sluice also is the last hurdle before encampment at Rubicon Springs, which represents another powerful symbol of Jeeping: The party.

Hoedowns here are legendary, and set a standard other Jamborees have yet to match. They've been that way from the start.

Before the very first Rubicon trip, organizers got hold of an old World War II weapons carrier and hauled in enough pine decking to build a 16 x 32-foot dance pavilion, complete with a shiny linoleum floor. In the second year, a piano was brought in. Lashed to the back of a Jeep truck, the instrument was rather dreadfully out of tune by the time it arrived at Rubicon Springs. "But it didn't seem to matter," organizer Collins recalled, "because no one else was in tune, anyway!"

Rubicon Jeepers expect unexpected entertainment. Some years there are bluegrass musicians. Serenading the encampment on one occasion were the Twelve Singing Nuns of St. Celeia's Chorale. Another year, a Scottish bagpipe band came marching out of the brush.

And to replace the out-of-tune spinet, a Hughes 500D helicopter has lately set down a shiny black concert grand, complete with classical pianist. (The chopper always is on standby in case of medical emergency.) In 1974 two participants -- Charles Donahue and Susann Marie Bernard -- were married in a ceremony held at Rubicon Springs.

Great food is another Rubicon tradition. Steaks, chicken, and fish are helicoptered in and grilled over coals. The typical trip's menu includes 2.6 tons of meat, 1,094 dozen eggs, 500 pounds of pancake mix with 60 gallons of syrup, 1,500 ears of corn, 35,000 slices of bread, 255 pounds of butter, and 150 pounds of coffee. Included among the supplies, by official calculation, is 9.4 miles of toilet paper.

Food and festivities offer a respite from the rigors of the Rubicon. Some Jeep adventures offer no such reprieve.

In 1978, Smith, Collins, and some of their colleagues undertook what Smith brands the ultimate Jeep trip, a 21,000-mile odyssey from Tierra del Fuego, at the southern tip of South America, to Prudhoe Bay, Alaska.

The journey consumed four months. While eking out a trail through dense South American forests, the Jeepers lived off the land, eating alligator, Iguana, Scarlet McCaws, and whatever else could be shot, trapped, or hooked.

Between Panama and Colombia they encountered a nearly impenetrable 250-mile expanse of jungle and swamp. "It was 10 times longer and 10 times rougher than the Rubicon," Smith said. "On an average day we would make two to three miles. One day we worked for nine hours and only moved 500 feet."

Within this leg was the 110-mile Darien Gap. It had been crossed only once before by vehicles, when a 1972 British Army expedition did it with 250 men. It took the British 100 days, and eight Colombian Marines were lost. The Jeepers' crossing was made by 14 North Americans, three Colombians, and 25 Indians. It took 30 days. There were no casualties.

The only modifications to the CJ-7s on the Expedicion de las Americas CJs were the addition of winches, extra lighting, brush guards, and carriages to carry provisions and cans of extra fuel. Even the tires were close to stock size, at a modest 31 x 11.5 R15, and were fitted without suspension modifications.

Adventures like this seem at odds with the notion that relatively few Jeeps venture off-road. Those that do, however, seem to wear their mud and dents like badges of honor. And their drivers tend to sport a certain smile and walk. Some lifestyle. Some accessory.

Find out more about the Jeeper's lifestyle with details on Camp Jeep and Jeep 101 on the next page.