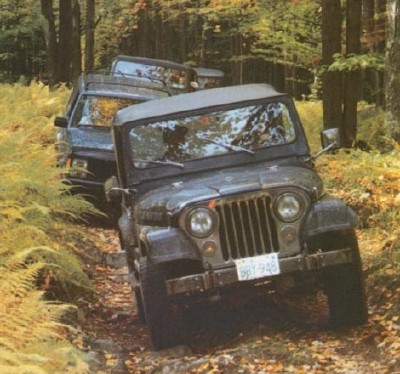 One of motoring's ironies is that only 5 percent of sport-utility vehicles are taken off-road. To many owners these all-terrain conveyances are nothing more than trendy lifestyle accessories. But to the participants of the Jeepers Jamboree, driving the Jeep is an art.

Jeeps venture from the pavement at about twice the rate of all sport-utilities. But even at 10 percent, they're underused. That's a pity, for even the plushest Grand Cherokee is highly capable in the harshest terrain. In fact, Chrysler President Robert Lutz has decreed that every Jeep vehicle must be able to run the torturous Rubicon Trail.

Lutz could hardly pick a tougher proving ground. Traversing 70 miles of scenic vistas, boulder-strewn gullies, and semi-suicidal descents, the trek through California's Sierra Nevada Mountains is a mecca for serious off-roading. It's the site of the original Jeepers Jamboree and the model for a cavalcade of off-road Jeep trips nationwide.

These events attract thousands, from trail-hardened veterans in jacked-up CJs to families in shiny Cherokees getting their first taste of off-road driving. They demonstrate not only the go-anywhere tenacity of a Jeep but the camaraderie this special vehicle can inspire.

Jeep, of course, was born to the backwoods. Its original military parameters were for a light troop transport that could defeat the most inhospitable geography. Even before World War II had ended, its peacetime commercial and recreational possibilities were being plotted.

In 1944, Willys-Overland built several prototypes of civilian Jeeps, and by August 1945, the first CJs were proving their mettle all over the United States. They were used for everything from farm vehicles to personnel carriers. They transported sportsmen into the field and even performed public services.

As early as 1946, a group of jeep owners in remote Bountiful, Utah, had turned Sunday excursions up and down the winding mountain roads of the Wasatch Range into a valuable community resource.

Given certain limited powers of policing, the group became known as the "Official Bountiful City Jeep Posse." Consisting of 27 jeeps and 54 men, the posse evacuated the injured from a mountainside plane crash, organized search parties for missing persons, and served as mounted game wardens. Its most important function was to rush in firefighters during the first critical hours of a forest fire.

The February 1948 issue of Popular Mechanics described the posse's attempt to cut a road up a mountain, providing a vivid account of the little 4 x 4's stoutness:

"The lead jeep started up the steep incline and at one of the dangerous spots it got out of control. The driver leaped to safety, but the car rolled down the slope like an awkward snowball. It turned over 20 times by actual count before landing upside down, suspended in some trees. It took ten men to get it back up the cliff.

"Once back on its four wheels the rugged jeep went back to town under its own power! To be sure, it needed a new windshield, some new headlights and a few dents had to be pounded out of the body, but it was ready for the next attempt the following Sunday."

Similar excursions were being played out anywhere the road ended and adventure began. Learn about the Rubicon Trail on the next page.