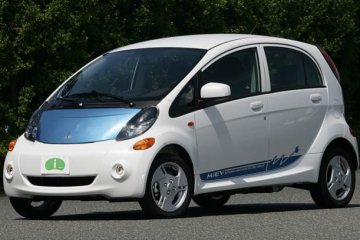 How much do you know about eco-friendly cars?
Mitsubishi

Just because a car says “hybrid” on its side panel, is it really any easier on the environment than its entirely gas-burning counterparts? Green technology strives to lessen our impact on the environment, but how can you really be certain how much your car is impacting the planet? “Green” vehicles are becoming more accessible and more prevalent, but just how do they compare to other cars — and to each other?

New Labels to Navigate by

Will electric cars have a window sticker like this? You can help decide.
FuelEconomy.gov

One way that the federal government is assisting us in toeing the green line is with new standards and regulations. Beginning with model year 2013, vehicles we will see mandatory new EPA labels like the one above attached to window stickers. These are designed to give the consumer a clearer picture on just how green his new set of wheels is (or isn’t).

While the labels do provide some good insight on usage, they do not consider environmental impact during the production process but on a vehicle-to-vehicle scale the differences would be negligible – at this point anyway. One could make the argument that vehicles produced in countries with less stringent manufacturing regulations are not as green as those produced here in the States, and I am sure critics can sit here and make a great argument for plants run on electricity provided by cleaner energy sources. But since most a car’s environmental impact comes from its use — not it’s manufacture — the former is a better indication of eco-impact.

Topping the list of greenest vehicles is the Mitsubishi i-MiEV (pictured at top), which has the highest MPGe (Miles Per Gallon equivalent) of 112 (126 city and 99 highway) and an energy impact score of 0.3 barrels of fuel per year. The MiEV is also the cheapest to operate at $0.90 every 25 miles. 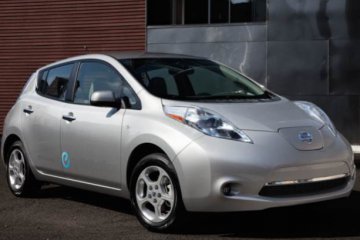 Check out the Nissan Leaf!
Nissan 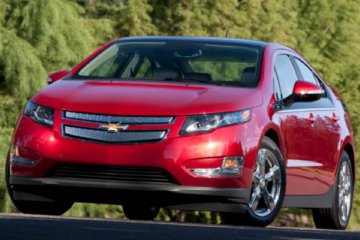 Have you ever seen a Chevrolet Volt?
Chevrolet

When operating on electric power only, the Chevy Volt would show up third on the list of greenest cars with a combined MPGe of 94 and energy-impact score of 0.4 barrels/year. With the gas motor operating fuel economy figures drop to 35 mpg city and 40 mpg highway. 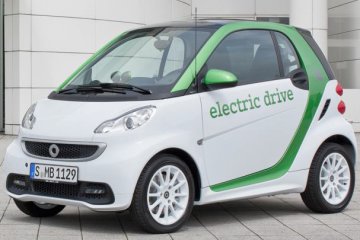 How much do you know about electric cars?
Smart

The smart fortwo electric drive arrives third if you run the gas motor on your Volt – fourth, if not. It features a combined score of 87 MPGe and costs $1.17 every 25 miles. Issue for U.S. consumers is that only 250 are slated for that market. 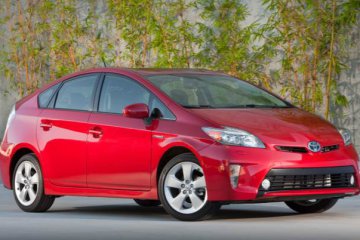 Check out the Toyota Prius!
Toyota

By all counts the venerable Prius from Toyota ranks highest of vehicles relying on hybrid gasoline-electric propulsion technology. It is rated at 51 mpg city and 48 mpg highway (50 combined). Pretty close behind that is the new larger Prius V with 44 mpg city and 40 mpg highway (42 combined). 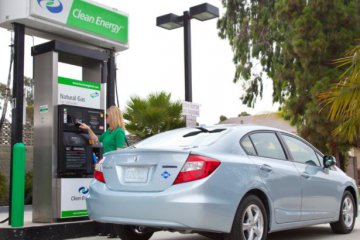 How much do you know about natural gas vehicles?
Honda

In a tie for fifth is the new Honda Civic Natural Gas (formerly the GX). It’s availability is being expanded to 35 states, up from only four, and has a higher green score than the Prius with fuel economy equivalent coming in at 24 mpg city and 36 mpg highway.

Check out the gas mileage!
Honda 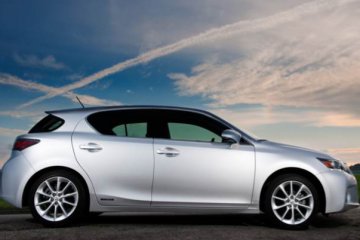 The Lexus CT200h rolls in next with 43 mpg city and 40 mpg highway. The Hybrid Synergy Drive technology used in Toyota/Lexus hybrid models benefits from city driving while the Integrate Motor Assist system used by Honda has better economy on the open road. 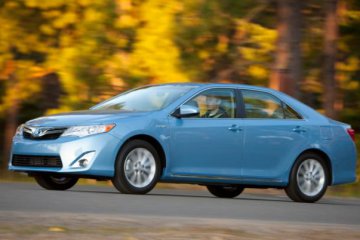 Ninth is a (very) last-minute entry in the Toyota Camry Hybrid which has been upgraded (like the Hondas) for 2012. Fuel economy has improved to 43 mpg city and 39 mpg highway with the new vehicle also seeing weight reductions and more efficient packaging. 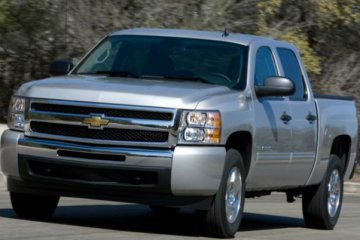 Have you ever seen a hybrid truck?
Chevrolet

As pickups are the best-selling vehicles in the U.S., I am going to finish this list with the greenest truck available today. As they make up a good number of vehicles on the road, they have to be taken into account in the overall picture of green driving. General Motors boasts the best numbers with its Chevy/GMC half-ton hybrid pickups offering 20 mpg city and 23 mpg highway. 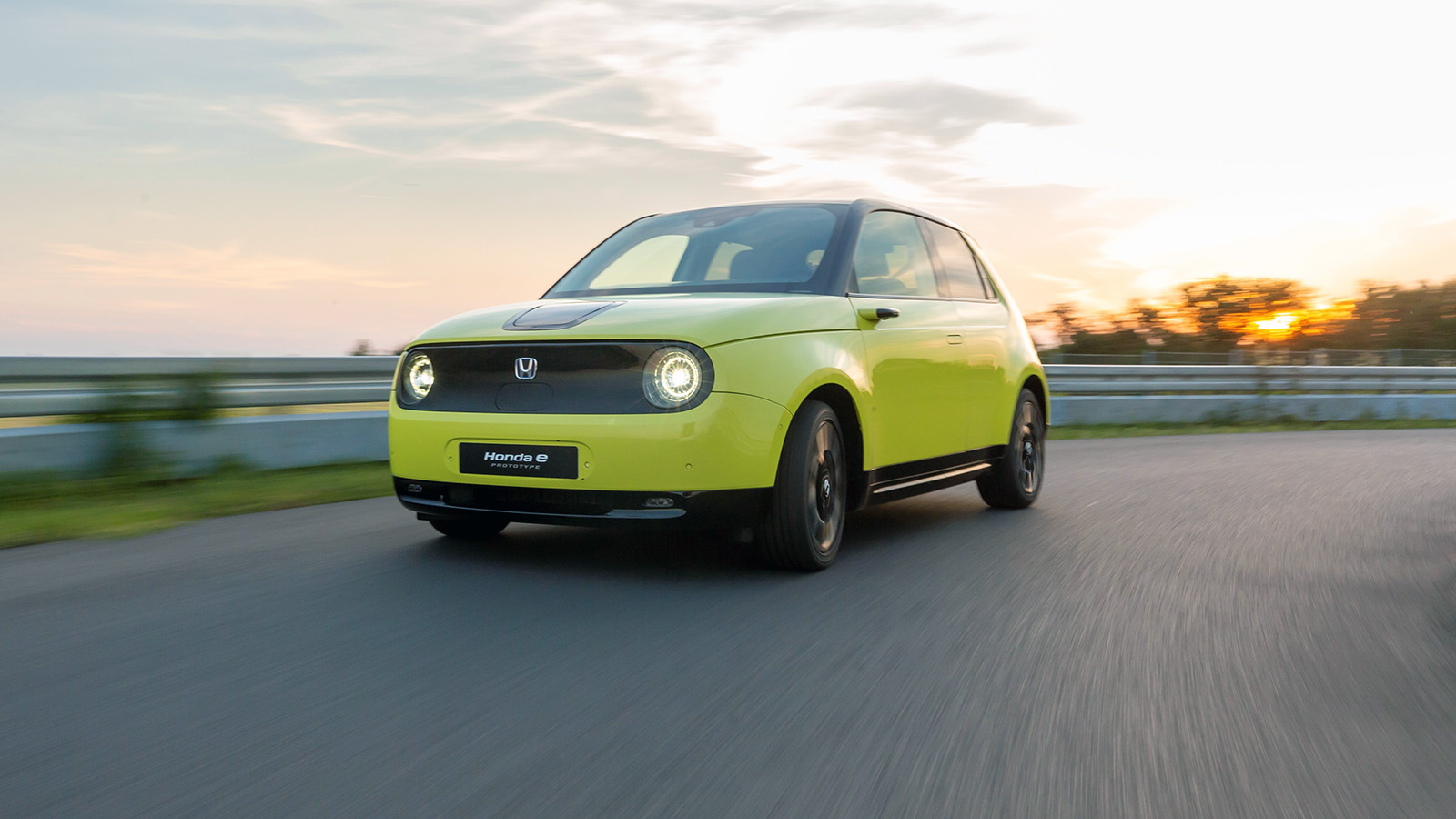 The newest electric vehicle from Honda is a throwback to the 1970s Honda Civic, with more charming and endearing styling. HowStuffWorks fell hard.

By comparison I am including a couple of vehicles that do not score so well environmentally. Top honors — that is, the least green car — is the Bugatti Veyron supercar (8 mpg city), but with a seven-figure price tag, we don’t need to worry about them melting our polar icecaps anytime soon. And while Chevy may have the greenest truck, they also offer the meanest with the K2500 Suburban at 10 mpg city and 15 mpg highway.