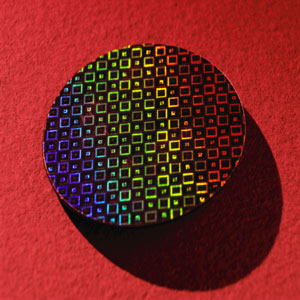 In a solar vehicle ventilator, a series of solar cells like this one wired to a small fan helps keep you and your car cool in direct sunlight.
Steve Cole/Getty Images

­The most striking aspect of solar vehicle ventilators is the way they use solar power to run themselves. Their power source is free and will never permanently go away -- in our lifetimes, anyway. To harness the power of the sun, these contraptions rely on a series of photovoltaic (PV) cells.

Photovoltaic cells work by photoelectric action. What's that? Light particles from the sun or other bright light source -- known as photons -- knock electrons loose from the solar cell's photovoltaic medium, usually silicon. Some of these loosened and energized electrons travel through an electrical circuit to power a device. On their return trip through the circuit, these now de-energized electrons can do one of two things: They can repeat the process, if strong sunlight is present; or they can settle back into available silicon molecules if the sun goes away and stops providing photons as fuel [source: GE Solar].

In a solar typical vehicle ventilator, a bank of solar cells is wired to a small, low-voltage fan. This fan moves air while tiny vents send hotter air out and guide cooler air into your car. Typically, the entire vent apparatus hangs from a long strip of gasket-like material that dangles from the top edge of your car door window when installed. The miniature solar array and the fan itself fit against the interior window glass, well-protected from the elements and curious passersby.

One standard measure for a fan's potential cooling capacity is the amount of air it can move in a given time period, often expressed as cubic feet per minute (CFM). One solar car ventilator's manufacturer claims that its product exchanges the air within a car about once every 20 minutes. If we take a typical sedan such as a Toyota Camry, with its 101 cubic feet of interior passenger space, this works out to roughly 5 CFM for the solar fan. By contrast, a plug-in, three-speed, 16-inch diameter, oscillating table fan moves between 1,300 and 1,700 CFM.

With one of these solar-powered gadgets, it's a bit unrealistic to expect to return to an igloo-cool car interior on a 90-plus degree day; however, it is reasonable to expect a cabin that's not as hot as it could have been. In addition, as some vendors mention, the fans can keep enough air moving to evacuate unpleasant odors that often thrive in the hot and humid environment of a sealed car. If you're the kind of person that forgets to remove smelly gym shoes or uneaten fast food from the car, one of these devices just might spare you a little embarrassment when friends come along for the ride.

This technology isn't perfect, of course. It does have its weaknesses. To learn more about the drawbacks of using a solar vehicle ventilator, read on to the next page.