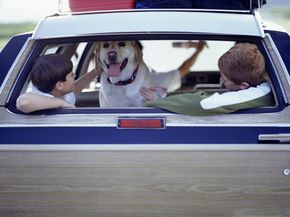 A solar-powered vehicle ventilator would keep this merry trio cool inside a hot car on a summer day.
Steve Mason/Getty Images

It's a blazing hot summer day, and you've left the air-conditioned confines of the local mall to return to your car. Since the parking garage was full, you've parked your car amongst hundreds of others on a vast plain of sweltering asphalt. As you open the driver's side door, you notice that the escaping heat is so thick that it actually casts shadows on the pavement. You brace for the burning heat your bare legs and shoulders will have to endure before the air conditioning kicks in. Your lungs protest as you breathe in the furnace-like air.

That furnace analogy is no exaggeration: Even on a moderately warm day, a car's interior temperature can reach 160 degrees Fahrenheit (71 degrees Celsius). Interior surfaces can reach a sizzling 200 degrees Fahrenheit (93 degrees Celsius) [source: L.A. Times]. How do you keep your unattended car's interior from becoming a crematorium when the mercury outside is pushing triple digits? One way is to install an easy-to-use solar vehicle ventilator.

The device's name sounds a lot more complex than the device actually is. A solar vehicle ventilator, also called a solar car vent or solar car fan, takes the sun's energy and converts it into the low-voltage electricity required to drive a small fan. The fan blows stale, hot air out of your vehicle and draws fresher air in. These and similar automotive gadgets can decrease your car's interior temperature by up to 15 degrees.

­That may not sound like much, but on hot days those 15 degrees can mean the difference between life and death, since temperatures above 100 degrees Fahrenheit (38 degrees Celsius) has often proven fatal to children and pets left alone in cars. Mazda launched an integrated solar ventilation system in the early 1990s, but has stopped offering this feature for unknown reasons. Audi and Mercedes-Benz have more recently offered such systems as options [Source: L.A. Times]

­However, if an Audi or Benz doesn't fit your current budget, you can always purchase a portable solar ventilator. Designed to fit most passenger vehicles, these universal ventilators typically will cost between $20 and $40, leaving you plenty of cash to spend on other things besides luxury German automobiles.

In this article, we'll take a look at how these sun-powered gizmos operate, how to set them up for maximum efficiency, and what to look for if you decide to purchase one.

Learn more about the mechanics of solar vehicle ventilators on the next page. 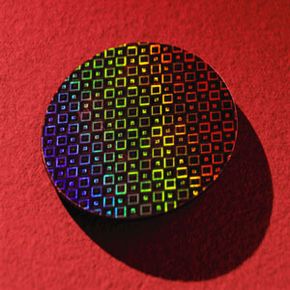 In a solar vehicle ventilator, a series of solar cells like this one wired to a small fan helps keep you and your car cool in direct sunlight.
Steve Cole/Getty Images

­The most striking aspect of solar vehicle ventilators is the way they use solar power to run themselves. Their power source is free and will never permanently go away -- in our lifetimes, anyway. To harness the power of the sun, these contraptions rely on a series of photovoltaic (PV)cells.

Photovoltaic cells work by photoelectric action. What's that? Light particles from the sun or other bright light source -- known as photons -- knock electrons loose from the solar cell's photovoltaic medium, usually silicon. Some of these loosened and energized electrons travel through an electrical circuit to power a device. On their return trip through the circuit, these now de-energized electrons can do one of two things: They can repeat the process, if strong sunlight is present; or they can settle back into available silicon molecules if the sun goes away and stops providing photons as fuel [source: GE Solar].

In a solar typical vehicle ventilator, a bank of solar cells is wired to a small, low-voltage fan. This fan moves air while tiny vents send hotter air out and guide cooler air into your car. Typically, the entire vent apparatus hangs from a long strip of gasket-like material that dangles from the top edge of your car door window when installed. The miniature solar array and the fan itself fit against the interior window glass, well-protected from the elements and curious passersby.

One standard measure for a fan's potential cooling capacity is the amount of air it can move in a given time period, often expressed as cubic feet per minute (CFM). One solar car ventilator's manufacturer claims that its product exchanges the air within a car about once every 20 minutes. If we take a typical sedan such as a Toyota Camry, with its 101 cubic feet of interior passenger space, this works out to roughly 5 CFM for the solar fan. By contrast, a plug-in, three-speed, 16-inch diameter, oscillating table fan moves between 1,300 and 1,700 CFM.

With one of these solar-powered gadgets, it's a bit unrealistic to expect to return to an igloo-cool car interior on a 90-plus degree day; however, it is reasonable to expect a cabin that's not as hot as it could have been. In addition, as some vendors mention, the fans can keep enough air moving to evacuate unpleasant odors that often thrive in the hot and humid environment of a sealed car. If you're the kind of person that forgets to remove smelly gym shoes or uneaten fast food from the car, one of these devices just might spare you a little embarrassment when friends come along for the ride.

This technology isn't perfect, of course. It does have its weaknesses. To learn more about the drawbacks of using a solar vehicle ventilator, read on to the next page.

Due to their dependence on the sun, solar car ventilators do have a few weak points:

Luckily for eco-friendly drivers, some car manufacturers are already on the case. Owners of solar car ventilators have frequently complained that the devices don't work away from direct sunlight. In fact, parking in the shade or even with the solar panel facing away from the sun can render solar vents useless. To address this, some manufacturers now make solar vents that also plug into a car's 12-volt power receptacle. So, when available solar power is too weak to drive the fan's motor, the ventilator draws a small amount of electricity from your car's battery.

You've probably already started thinking about the money you could save by keeping your air conditioning off during the dog days of summer, but you should hold off on that thought for now. Solar-powered car vents are in no danger of replacing regular air conditioning anytime soon. Air conditioning uses highly pressurized coolant to transfer heat away from a certain area, then uses a high-powered fan to blow the resulting cold air where it's desired. A solar-powered fan, by contrast, merely blows hot air out of the car through its exhaust vent, and sucks presumably cooler air into the car through its intake vent [source: Chen]. Be careful while you're out on the road, though: It's not advisable to keep a solar ventilator mounted while you're actually driving, as the fan and solar panel assembly could block your vision out of either side window.

We've talked long enough about the doom-and-gloom side of things. What are the strengths of these devices? To learn about the benefits of solar-powered vehicle ventilators, go to the next page. 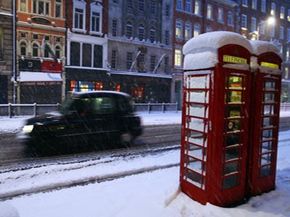 The snow and slush is bad enough, but the overcast skies also would make this taxi's solar vehicle ventilator all but useless.
Gareth Cattermole/Getty Images News

You wouldn't purposely toss your favorite CDs, expensive electronics or sensitive automotive gadgets into your oven and set it on broil for several hours. Yet, that's exactly what happens when you park your car in direct sunlight and leave your valuables inside. It's even worse if they're left in a high-exposure area such as the front seats or on the dashboard. What's more, excessive sun exposure causes cracks in leather, plastic and other finishes that make up your car's interior trim.

At about $20 to $40, a solar vehicle ventilator offers several potential benefits. For example, less work is required for your car's air conditioner to perform at vehicle start-up, you might benefit from a better-smelling car, and you can boast that your car is cooled by clean energy. A solar car ventilator won't block out ultraviolet rays that contribute to the deterioration of your car's interior, but it can increase airflow and make returning to your car on a scorching hot summer day a bit more bearable. Solar ventilators can also help evacuate offensive smells and the air humidity that fosters them.

Will one of these gadgets fit your ride? Probably. Most models on the market today include extendable or flexible skirts that allow easy mounting on practically any car or truck's window edge. Unlike louvers or window tints that also promote cooler vehicle interiors, you don't have to worry about altering the vehicle, which can become a real concern if you lease your car. And unlike window tint, which varies in legality from state to state, a solar vehicle ventilator can be used anywhere you park your vehicle, provided adequate sunlight is available for power. Keep in mind that your results may vary depending on several factors, including the sun's position and the quality of the ventilator you select.

To find out lots more information about solar vehicle ventilators and other related topics, go to the next page.

Special Offer on Antivirus Software From HSW and TotalAV Security 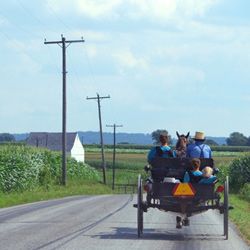 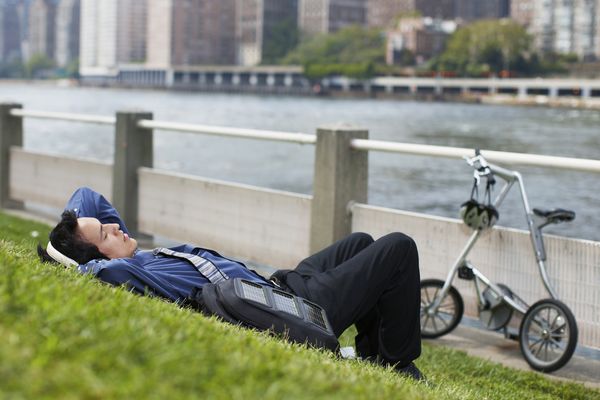 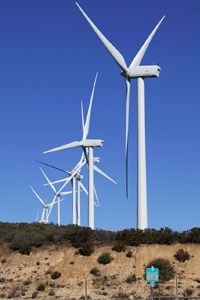