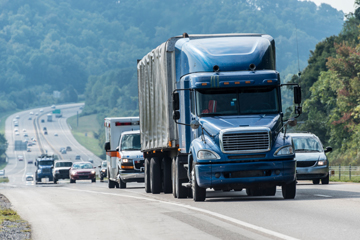 Some of the most motivated hypermilers draft behind other vehicles while the engine is switched off. They're basically swept along in the lead vehicle's tailwind.
(WendellandCarolyn/Getty Images)

Hypermiling is a dangerous practice in general, especially if the driver isn't always aware of the road conditions and surrounding traffic. But the techniques we'll discuss on this page are particularly risky because their success depends on being aware of those conditions ... and then totally flaunting them. As you'll find out, some of the most effective hypermiling strategies work only because the driver intentionally sacrifices control of the vehicle in order to use less gasoline, which should immediately raise a red flag. We'll see how these practices can work for some; but we'll also learn why they can be hazardous to everyone else on the road.

To start, there are a lot of variations on coasting, each carrying its own degree of risk. But it's this coasting technique that makes up the majority of a risky hypermiler's arsenal. Engine-off coasting means achieving an acceptable speed, shifting into neutral and then killing the engine to coast as far as possible with the car's ignition switched off -- using only momentum to keep moving forward. When the car eventually decelerates to an unacceptable speed, the driver switches the engine on, accelerates gradually until the car reaches the desired speed and the whole process is started once again. This pulse-and-glide technique is dangerous for the hypermiling driver and it's dangerous for every other driver on the road since switching off the car's ignition affects braking, steering and other normal control functions -- not to mention the unpredictability of a car that refuses to maintain the same speed as surrounding traffic.

Not enough of a challenge? Some of the most motivated hypermilers draft behind other vehicles while the engine is switched off. They're basically swept along in the lead vehicle's tailwind. The larger the vehicle in front, the better. Tailgating behind semi-trucks is dangerous even under the best of circumstances (since it requires sacrificing control to another driver who probably can't see you in the blind spot), but hypermilers are especially drawn to the practice. Regular drafting (with the engine on) is a fairly common and much less extreme (yet still dangerous and still effective) version of the coasting technique. Some hypermilers claim they've achieved up to a 40 percent reduction in fuel usage by simply tucking in close behind another vehicle [source: Hypermiler]. Sure, you can get great mileage coasting and drafting behind a semi, but just think how much fuel will be spilled when the entire car, including the fuel tank, is wrenched to bits.

Overinflating tires is another common strategy that helps hypermilers, because it decreases rolling resistance. How does that work, exactly? Well, tire inflation specs are designed for optimal contact between the tire tread and the road surface -- providing enough connection between the two to give the car good traction. If the tires are underinflated, they can't support the car's weight and the wheels can't roll correctly. But if the tires are overinflated, less of the tire will touch the road surface. Riding on overinflated tires uses less fuel because less contact between the rubber and the road means less rolling resistance. Of course, overinflating your car's tires also causes them to wear out very quickly, greatly increases the chances of a blowout and makes it much harder to keep the car traveling on a straight and safe path.

Hypermilers also have a penchant for stripping down their cars to the bare minimum to save weight. Sure, take out the air conditioner if that's your thing, and yank out the backseat bench if you never seem to have any passengers. But some hypermilers take it to the extreme, removing important safety features like rearview mirrors or even the car's airbags. Obviously, for the hardcore hypermiler, saving gas is a lot more important than maintaining a basic level of comfort -- or safety. And even if some modifications fly in the face of the U.S. Department of Transportation regulations, well, it's up to the drivers and their (hopefully well informed) passengers to decide to take such risks. But modifications that reduce visibility, awareness and vehicle control tend to affect everyone else on the road, too. Even a simple tool, something as innocuous as a real-time fuel monitor, can prove hazardous if a hypermiler can't seem to tear his or her eyes away from the display long enough to focus on the road ahead.

The hypermiling community at large has generally condemned these techniques, realizing that saving a few gallons of fuel is not worth endangering the lives of everyone else sharing the road. But there remains a devoted faction of avid practitioners out there, too. So if you see a hybrid or other small car close on the heels of a semi, or drastically losing speed on the highway, it's probably best to steer clear and let the obvious (and possibly oblivious) hypermiler save fuel in solitude.

It's so tempting to use this space to comment on the self-righteousness of hypermilers, but it's all been said before. Instead, I'm going to reminisce about driving a manual transmission, and how coasting in neutral was a lot of fun. I never had an engine kill switch; I don't even think I ever voluntarily turned off the engine while driving. I wasn't coasting to save gas -- it just gave me a goofy little thrill to shift into neutral and let it roll for a while. The fuel savings couldn't have come close to offsetting how much gas I splurged on while I was cruising around town out of sheer boredom. After all, even hypermilers have to get their blood pumping somehow.