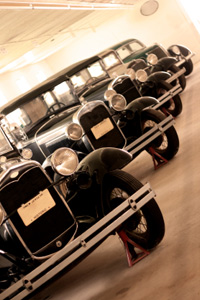 These antiques cars demonstrate how little was known about vehicle aerodynamics in the early part of the 20th century.
©­iStockphoto.com/John W. DeFeo

While scientists have more or less been aware of what it takes to create aerodynamic shapes for a long time, it took a while for those principles to be applied to automobile design.

There was nothing aerodynamic about the earliest cars. Take a look at Ford's seminal Model T -- it looks more like a horse carriage minus the horses -- a very boxy design, indeed. Many of these early cars didn't need to worry about aerodynamics because they were relatively slow. However, some racing cars of the early 1900s incorporated tapering and aerodynamic features to one degree or another.

In 1921, German inventor Edmund Rumpler created the Rumpler-Tropfenauto, which translates into "tear-drop car." Based on the most aerodynamic shape in nature, the teardrop, it had a Cd of just .27, but its unique looks never caught on with the public. Only about 100 were made [source: Price].

On the American side, one of the biggest leaps ahead in aerodynamic design came in the 1930s with the Chrysler Airflow. Inspired by birds in flight, the Airflow was one of the first cars designed with aerodynamics in mind. Though it used some unique construction techniques and had a nearly 50-50-weight distribution (equal weight distribution between the front and rear axles for improved handling), a Great Depression -weary public never fell in love with its unconventional looks, and the car was considered a flop. Still, its streamlined design was far ahead of its time.

As the 1950s and '60s came about, some of the biggest advancements in automobile aerodynamics came from racing. Originally, engineers experimented with different designs, knowing that streamlined shapes could help their cars go faster and handle better at high speeds. That eventually evolved into a very precise science of crafting the most aerodynamic race car possible. Front and rear spoilers, shovel-shaped noses, and aero kits became more and more common to keep air flowing over the top of the car and to create necessary downforce on the front and rear wheels [source: Formula 1 Network].

On the consumer side, companies like Lotus, Citroën and Porsche developed some very streamlined designs, but these were mostly applied to high-performance sports cars and not everyday vehicles for the common driver. That began to change in the 1980s with the Audi 100, a passenger sedan with a then-unheard-of Cd of .30. Today, nearly all cars are designed with aerodynamics in mind in some way [source: Edgar].

What helped that change to occur? The answer: The wind tunnel. On the next page we'll explore how the wind tunnel has become vital to automotive design.