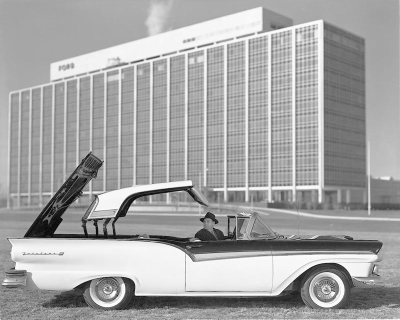 Buyers responded early in the model year, but the rush to seat-belts overtaxed Ford's supplier, so only 20 percent of the '56s got them. Ford continued to stress safety for a few more years, but put more emphasis on performance. Speaking of which, the 272 V-8 delivered 173 horsepower as a '56 Mainline/Customline option. A new 312-cid "Thunderbird" unit with 215/225 horsepower was ­optional across the board, and a midrange 292-cid V-8 offered 200 horsepower.

All were available with six or V-8 power. Both Fairlane series listed two- and four-door Victorias, plus thin-pillar equivalents that looked like hardtops with windows up. The glamorous droptop Sunliner was now a Fairlane 500 and came with the base V-8. Haulers comprised plain and fancier Del Rio two-door Ranch Wagons, a pair of four-door Country Sedans, and the wood-look four-door Squire -- Ford's priciest '57 wagon at $2684.

Ford's '57 styling was particularly simple for the period: a blunt face with clean, full-width rectangular grille; tasteful side moldings; and tiny tailfins. More importantly, it was new against Chevy's second facelift in two years. Unfortunately, the Fords had some structural weaknesses (principally roof panels) and were prone to rust, one reason you don't see that many today.

But though Plymouth arguably won the styling stakes with its finned "Forward Look," 1957 was a great Ford year. In fact, the division scored a substantial win in model-year output with close to 1.7 million cars to Chevy's 1.5 million. Some statisticians also had Ford ahead in calendar-year volume for the first time since 1935, though the final score showed Chevy ahead by a mere 130 cars.

The Skyliner name returned in mid-1957, but on a very different Ford: the world's first mass-produced retractable hardtop. An addition to the Fairlane 500 series, it stemmed from engineering work done a few years before at Continental Division, which had considered, but didn't produce, the 1956 Mark II as a "retrac."

Ford sold 20,766 Skyliners for '57, but demand fast tapered to 14,713 for '58, then to 12,915. The model was duly axed after 1959, a victim of new division chief Bob McNamara's no-nonsense approach to products and profits. Skyliner "retracs" became prime collectibles, and the retractable-hardtop concept made a comeback in the new millennium.

For 1958, Ford countered all-new passenger Chevys and modestly restyled Plymouths with a glittery facelift featuring quad headlamps and taillamps, a massive bumper/grille a la '58 Thunderbird, and more anodized aluminum trim. V-8 choices expanded via two new "FE-series" big-blocks: a 332 offering 240/265 horsepower, and a 300-bhp 352. A deep national recession cut Ford volume to just under 988,000 cars. Chevrolet sold over 1.1 million, but spent much more money to do so.

Chevy then unveiled an all-new line of radical "bat-fin" cars for 1959. Ford replied with more-conservative styling that helped it close the model-year gap to less than 12,000 units. A major reskin of the basic 1957-58 bodyshells brought square lines; simple side moldings; a heavily sculptured "flying-V" back panel; and a low, rectangular grille filled with floating starlike ornaments.

All previous models continued, though now on the 118-inch wheelbase. Come midseason, a new Galaxie series of two- and four-door pillared and pillarless sedans generated high buyer interest and strong sales with their square but stylish Thunderbird-inspired wide-quarter rooflines. At the same time, the Sunliner convertible and Skyliner retractable gained Galaxie rear-fender script (but retained Fairlane 500 ID at the rear).

V-8s were down to a 200-bhp 292, 225-bhp 332, and 300-bhp 352. Also carried over from '58 was Cruise-O-Matic, Ford's smooth new three-speed automatic transmission that proved a sales plus against Chevrolet's Powerglide, if not Plymouth's responsive three-speed TorqueFlite.

For Ford Motor Company as a whole, 1959 seemed to justify the strenuous efforts of Henry Ford II and board chairman Ernest R. Breech. Assuming control of a third-rate company in 1945, they'd turned it into something approaching General Motors in less than 15 years.

Ford's path through the 1960s closely parallels that of rival Chevrolet. At decade's end, it was also selling only about 400,000 more cars per year than in 1960 -- despite expansion into important new markets: economy compacts, intermediates, and sportier standard-size models. Also like Chevy, Ford built these diverse types on relatively few wheelbases. (See separate entries for the stories on the personal-luxury T-Bird and the new-for '65 Mustang "ponycar," the two most-specialized Fords of this period.)