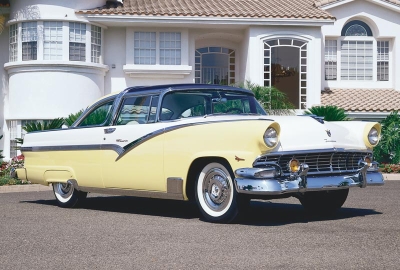 Ford's ingenuity with models like this 1956 Ford Crown Victoria earned it the No. 2 spot for manufacturing volume.

The stage was set for a smart comeback in the '50s. And indeed, by 1952, Ford Motor Company had passed a faltering Chrysler Corporation to regain the number-two spot in manufacturer volume. The reason? Interesting cars that sold well.

Efforts for 1950 aimed at quashing the bugs from '49. "50 Ways New, 50 Ways Better," blared the ads. And the 1950s were better: tighter and quieter in corners and rough-road driving alike. A new confection was the V-8 Crestliner, a special-edition Custom Tudor priced $100-$200 above the standard article. It was snazzy, with a padded canvas-covered top and sweeping contrast-color panel on the bodysides, but sales were only fair at 17,601 for 1950 and another 8703 for '51. Crestliner's real purpose was to counter Chevy's true "hardtop-convertible," the 1950 Bel Air.

Otherwise, the 1950 Fords were predictably much like the '49s, though a crest instead of Ford lettering above the "bullet" grille provided instant I.D. Prices held steady, running from $1333 for the DeLuxe business coupe to $2028 for the Squire. Though still without a hardtop and a fully automatic transmission like Chevrolet, Ford bested 1930's imposing model-year output, making more than 1.2 million cars. But Chevrolet managed nearly 1.5-million, and would remain "USA-1" through 1953.

However, only second and third gears worked automatically; a shift to low had to be made manually. A redesigned dash gave the interior a more upscale look. Also new for '51 was Ford's first hardtop coupe, the Custom V-8 Victoria. Though it, too, was a bit late, the Vicky proved no less popular than Chevy's Bel Air, selling some 110,000 that debut season. Ford's model-year volume declined by about 200,000 cars, but Chevy's fell a similar amount, reflecting new government-ordered restrictions on civilian production prompted by the Korean War.

Model-year '52 introduced a clean, new, square-rigged Ford with a one-piece windshield, simple grille, small round tail-lamps, and an "air scoop" motif on the lower rear flanks. Only detail changes would occur to this basic design through 1954. Wheelbase crept up to 115 inches for a revised model slate that started with a cheap Mainline Tudor/Fordor, business coupe, and two-door Ranch Wagon, followed by Customline sedans, club coupe, and four-door Country Sedan wagon. Topping the range was the V-8 Crestline group of Victoria hardtop, newly named Sunliner convertible, and posh Country Squire four-door wagon.

These wagons, by the way, were Ford's first all-steel models (the Squire switching from real wood to wood-look decals). Assisting in their design was Gordon Buehrig, the famed designer of Classic-era Auburns, Cords, and Duesen­bergs who'd also had a hand in the '51 Victoria. Doing more with less, Ford introduced a new 215.3-cid overhead-valve six with 101 horsepower as standard for Mainline/Customline. The flathead V-8 was tweaked to 110 horsepower.

Dearborn observed its Golden Anniversary in 1953, proclaimed on Fords by special steering-wheel-hub medallions. But aside from that and a few other cosmetic details, the '53s were basically '52s with higher prices, now ranging from $1400-$2203.

With the Korean conflict ended, Ford Division built 1.2 million cars to edge Chevrolet for the model year (Chevy consoled itself with calendar-year supremacy), but only by dumping cars on dealers in a production "blitz" so they could sell for "less than cost." Ironically, Chevrolet wasn't much affected by this onslaught, but Studebaker, American Motors, and Kaiser-Willys were, because they couldn't afford to discount as much. The Ford blitz is generally considered one of the key factors in the independents' mid-'50s decline.

The venerable flathead V-8 was honorably retired for 1954 in favor of a new overhead-valve "Y-block" V-8 (so-called because of its frontal appearance in cross-section). With 130 horse­power, this was easily the year's hottest engine in the low-price field. Together with ball-joint front suspension, also new, the Y-block greatly narrowed the engineering gap between expensive and inexpensive cars. Its initial 239 cid was the same as flathead displacement, but the ohv had different "oversquare" cylinder dimensions. Compression was 7.2:1 in base trim, but could be taken as high as 12:1 if required (which it wasn't).

The rest of the '54 story was basically 1953 save a larger, 223-cid overhead-valve six with 115 bhp. There was also a novel new hardtop called Skyliner, a Crestline Victoria with a transparent, green-tint Plexiglas roof insert over the front seat. This concept, suggested by Buehrig and realized by interior styling director L. David Ash, is a forerunner of today's moonroof. But it cast a strange light on the interior, and heat buildup was a major problem. That and a price identical with the Sunliner convertible's -- $2164 -- held '54 Skyliner sales to 13,344. Only the Country Squire and Mainline business coupe fared worse.

Retaining the 1952-54 shell, the 1955 Ford was completely reskinned, emerging colorful if chromey, with a rakish look of motion and a modestly wrapped windshield. Styling was handled by Franklin Q. Hershey, who also gets credit for that year's new two-seat Thunderbird (see separate entry). Club coupes were abandoned, wagons grouped in a separate series, and Crestline was renamed Fairlane (after the Ford family estate in Dearborn). With the "horsepower race" at full gallop, the 239-cid V-8 was ousted for a 272 enlargement, packing 162/182 horsepower as an option for all models. The standard six gained five bhp to deliver 120 total.

Skyliner was also ousted for '55, but Ford had another idea. This was the Fairlane Crown Victoria, a hardtop-style two-door sedan with a bright metal roof band wrapped up and over from steeply angled B-posts. The "tiara" looked like a roll bar, but added no structural strength; a Plexiglas insert rode ahead of it, as on Skyliner. A full steel-roof model was also offered for $70 less than the "bubble-topper"; predictably, it sold much better: 33,000-plus to just 1999. The totals were 9209 and just 603 for '56, after which the Crown Vic was dumped.

But Ford as a whole did splendidly in banner 1955, shattering its postwar record of 1953 by building nearly 1.5 million cars. Still, the division was done in by an all-new Chevy, which tallied better than 1.7 million. Volume for both makes declined in the industry's overall retreat for '56, but Ford dropped by fewer than 50,000 versus Chevy's loss of nearly 200,000.