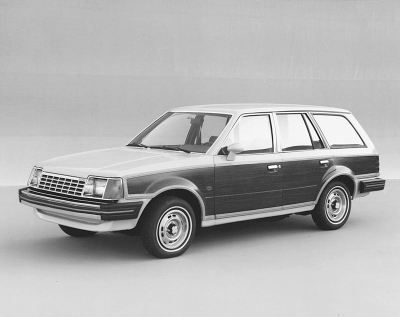 The Ford Escort, shown here as a 1981 GLX liftgate wagon with Squire Trim, was practical, low-priced and a best-seller for Ford.

A division mainstay throughout the '80s was the subcompact Escort, the new front-drive 1981 replacement for Pinto. Billed as the first in a promised fleet of Ford "world cars," it was ­jointly designed by the firm's U.S., British, and German branches under Project "Erika," but the European version ended up sleeker and faster than its American cousin.

Escort's original 1.6-liter (98-cid) engine had just 69 horsepower, but by 1983 was up to 72/80 horsepower with two-­barrel carb or 88 horsepower in optional throttle-body fuel-injected form. The last was standard for a new three-door GT model, which also came with five-speed, firm suspension, and black exterior trim.

An optional 2.0-liter (121-cid) 52-bhp diesel four from Mazda arrived for 1984 -- just in time for the start of a gas glut that quickly killed most all diesel demand in the U.S. That engine duly vanished after '87. A more-exciting 1984 development was a turbocharged 1.6-liter GT with 120 horsepower and a suitably uprated chassis. It was fast and fun but crude and not very quiet. A more-convenient, restyled dash was featured across the line.

A mid-1985 upgrade brought a larger 1.9-liter (113.5 cid) "CVH" with 86 horsepower in carbureted form or 108 with option electronic port fuel injection. The latter was newly standard for GT, which gained its own asymmetric body-color grille, aluminum wheels, bigger tires, rear spoiler, and rocker panel "skirts." All Escorts were mildly facelifted with smoother noses in the "aero" idiom pioneered by the '83 Thunderbird, marked by flush headlamps.

By 1987, Escort's plethora of alphabet series had been sifted down to a stark three-door called Pony, volume-selling GL (all three body styles), and three-door GT. The base engine was treated to throttle-body injection and moved up to 90 horsepower.

Styling became smoother in mid-1988: revamped rear quarters for sedans, a new grille and spoiler for GT, and minor cleanups elsewhere. GL was renamed LX, and the dash was restyled a second time. As with previous midyear model revisions, this one carried into 1989 and then 1990 practically without change. Escort's high success was not matched by an unhappy sporty coupe offshoot, the EXP.

New for 1982, it was Ford's first two-seater since the original Thunderbird, but its "frog-eye" styling wasn't in the same league. And though an Escort underneath, it cost considerably more. Still, first-year sales were respectable at over 98,000. But they plunged ominously to under 20,000 for 1983.

The following year, EXP picked up the "bubbleback" hatch of its discontinued Mercury twin, the LN7, as well as Escort's new dash and 120-bhp turbo option. Sales recovered to over 23,000.

The little-changed '85s sold some 26,400 early into the calendar year, when Ford suspended production. The car then reemerged in mid-1986 as the Escort EXP, with a similar new flush-headlamp front, revamped dash, and 1.9-liter engines for two models: 86-bhp Luxury Coupe and 108-bhp Sport Coupe.

Though nearly 31,000 were sold, EXP was still unequal to Japanese two-seaters like the Honda CRX and Toyota MR2. With base and luxury coupe, EXP eased below 26,000 for '87, then was abandoned in 1988 as a bad bet, though this did free up assembly-line space for regular Escorts.