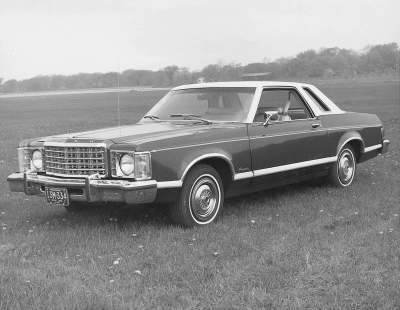 Granada was a far more rational proposition and one of Ford's best-timed ideas of this decade. Introduced during 1975, it was conceived as just a slightly larger Maverick using the same chassis and drivetrains.

But when the fuel crunch ­boosted small-car sales, Ford decided to retain Maverick and launch its erstwhile successor as a more-luxurious compact half a step up in price. This explains why the Granada appeared on the four-door Maverick's 109.9-inch wheelbase.

Adroitly keyed to the changing market, Granada blended American-style luxury with the mock-Mercedes look then in vogue. Buyers wholeheartedly approved, and Granada zoomed from nowhere to become Ford Division's top-seller, outdistancing the full-sizers and swollen Torinos by wide margins. It was soon a familiar sight on American roads. Not that it performed that well on those roads with its untidy cornering response and a roly-poly ride on rough sections.

Nevertheless, Granada bridged a big market gap at a crucial time, appealing to both compact buyers with upscale aspirations and big-car owners now energy-conscious for the first time. Offerings through 1980 comprised six and V-8 four-door sedan and opera-window coupe in base and plusher Ghia trim (the last referring to the famed Italian coachbuilder bought by Ford in 1970).

There was also a gesture toward sport in the 1978-80 ESS -- for "European Sports Sedan" -- but it was only a gesture. Maverick's true successor bowed for 1978 with a name borrowed from Ford's Australian subsidiary: Fairmont. It was undoubtedly Dearborn's single most significant new product of the decade, although few knew that outside the company. Why? Because Fairmont's basic engineering would be the foundation for most Ford Motor Company cars introduced through the mid-'80s, including a new-generation Mustang and T-Bird.

Billed as the first FoMoCo car designed with the aid of computer analysis, the Fairmont (and its Zephyr twin at Mercury) was a common-sense car and pretty conventional. Though conceived around a traditional front-engine/rear-drive format, it was a big improvement over Maverick: clean-lined; sensibly boxy for good interior space on a shorter 105.5-inch wheelbase; lighter and thus thriftier than many expected.

Engines were familiar -- initially the 140-cid Pinto four, 200-cid six, and 302-cid V-8 -- but there was a new all-coil suspension with modified MacPherson-strut front end geometry, which mounted the coil springs on lower A-arms. Aside from better handling, this arrangement opened up more underhood space for easier servicing. A front stabilizer bar was standard, as was rack-and-pinion steering, offered at extra cost with variable-ratio power assist, a new item shared with several other Fords that year.