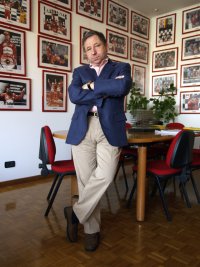 Ferrari also welcomed a new CEO in 2006, when managing director Jean Todt was named to the post. Todt had come to Ferrari in 1994 after a winning career as a rally driver and rally team manager for Peugeot. He fast put Maranello back on top in Formula 1, helped by a very talented young driver named Michael Schummacher.

Meantime, Ferrari completed a swift two-year renovation of its road-car portfolio with the 2005 debut of the 599 GTB Fiorano. Named in honor of Ferrari’s world-famous test track, this long-awaited successor to the 575 Maranello was immediately hailed for its strikingly handsome Pininfarina styling and the performance of a 611-horsepower 6.0-liter V-12 based on the mighty Enzo engine. Road & Track aptly summed up the 599 as “raucously raw, lusciously civil.”

They could have added “faithfully versatile.” To prove the new car’s stamina, Ferrari sent two 599s on a little 84-day, 20,000-mile drive in 2006, starting in Belo Horizonte, Brazil and finishing in front of the New York Stock Exchange. Impressively, the cars were unaltered except for different shock absorbers giving a slightly elevated ride height and an underbody plate made of aluminum instead of plastic.

The run, called the “Panamerican 20,000,” involved 48 journalists who took turns driving the cars on a demanding route through 16 countries on roads ranging from smooth sea-level highways to rough Andean trails at 13,000 feet. Both 599s arrived little the worse for wear, needing only periodic oil changes and occasional support-crew attention en route.

A company press release rightly said the event proved how “today’s Ferrari can be driven in every type of road condition.” But this was not the company’s first such endurance run. The F355 had toured round the world back in 1997, and a pair of 612 Scagliettis became the first cars to drive all over China, again largely without incident, in 2005.

But no Ferrari ever was purchased for its reliability. Ferrari ownership is the stuff of dreams, and no one appreciates that more than Ferrari itself.

Helped by its strong growth into the 21st century, the company steadily increased outreach efforts to its owners and fans the world over. There are several aspects to this “relationship marketing,” as big companies call it.

One is Corse Clienti, owner-driver competitions that encompass the Ferrari Challenge Series, launched in 1993 for identically prepared production models; the Shell Ferrari Historic Challenge for vintage cavallinos, inaugurated in 1996; and the F1 Clienti demonstration races in which owners experience the thrill of piloting prior-season Formula 1 Ferraris on demanding circuits, assisted by Maranello’s own technicians and team leaders.

Second, and even more exclusive, is the FXX Program, announced in early 2005. This centers on a “super Enzo” prototype conceived as a starting point for Ferrari’s future road and racing technology. FX was the Enzo’s factory designation, so FXX was logical for this next-step version. And what a step it is. Special even for a Ferrari, the FXX is packed with state-of-the-art components, including an 800-horsepower 6.2-liter enlargement of the Enzo’s V-12 engine.

Ferrari describes the FXX Program as including “a package of international-level events, during which an official team of technicians provides complete assistance and backup service to an exclusive group of Ferrari Client-Test Drivers.”

In other words, FXX owners get to play development engineer when they buy the car, all for around $1.9 million. This arrangement, says Ferrari, “provides a unique way for the Prancing Horse engineers to develop solutions ... with the help of the drivers. Track test sessions, driver debriefings and the use of sophisticated telemetry are all part of a typical ... working day.”

Of course, the work isn’t for just anyone. Only 30 or so FXXs would be built, and applications “were evaluated by a special in-house committee.” But if you qualified, you were in very good company. In fact, Michael Schummacher became FXX owner No. 30 soon after he stunned the racing world in late 2006 by announcing his retirement from Formula 1.

The other “personal touch” aspect of today’s Ferrari is the Carrozzeria Scaglietti Personalization Program, which allows buyers to customize their cars from a very broad slate of options.

The company is also pleased to fill “non-catalog” requests. Indeed, Ferrari was proud to state that every road car it built in 2006 was unique in terms of trim, color, mechanical components, convenience features, or some combination. Ferrari isn’t the only automaker offering such a high degree of customization -- Porsche, for one, has a similar program -- but it’s the kind of thing expected of a marque renowned for innovation, excellence, and excitement.

Ferrari marked its milestone 60th anniversary in 2007 with a grand celebration. Called the Ferrari 60 Relay, it was another world tour, this time spanning five continents and six months. The plan was to have more than 10,000 owners use their Ferraris to pass along a commemorative baton from place to place, starting in the wealthy Arab emirate Abu Dhabi in January and ending in late June at -- where else? -- Maranello. A dedicate Website tracked the tour’s progress.

Why begin in Abu Dhabi, which lies along the Persian Gulf? Because that’s where a Ferrari theme park -- yes, theme park -- is scheduled to rise on its own man-made island by 2009.

This idea isn’t as odd as you might think. As CEO Jean Todt noted in a press release, the small but prosperous emirate “is already one of our shareholders and a sponsor of the Scuderia [racing team]…The park will constitute an amazing opportunity to experience the world of Ferrari and to appreciate the values that have made the Prancing Horse a unique marque around the world.”

The park, joint effort of Ferrari and development company Aldar, is to cover 250,000 square meters encompassing 24 attractions “aimed at the family, a driving school and virtual simulation rides, as well as merchandising areas.”

The facility also includes a brand-new racetrack whose first scheduled event is the 2009 Abu Dhabi Formula 1 contest. With all this, Maranello’s answer to Disney World should be a real “E-ticket” experience.

Of course, excitement has always been a Ferrari hallmark, and that will never change even as the company and its cars continue to make history and thrill enthusiasts on road and track alike. More than ever, Ferrari is a breed apart, a marque with racing its blood and passion in its soul. And in today’s world, that’s something to celebrate.