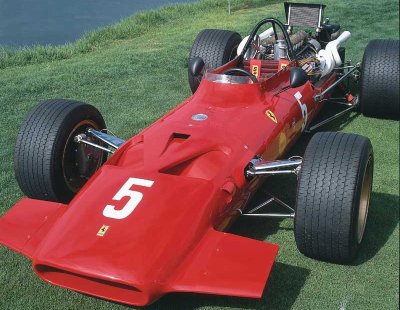 The Ferrari 312 F1 was a disappointment, winning only three races in four F1 seasons.

For 1966, Formula 1 again changed its engine rules, now allowing up to 3.0-liters displacement naturally aspirated or 1.5 supercharged. Ferrari was ready. Chief engineer Mauro Forghieri turned to the company’s sports-racing 3.3-liter V-12. He left the bore at 77mm, reduced stroke 5mm to 53.5mm, and came up with a displacement of 2989cc. He increased the compression ratio, fitted twincam heads with two plugs per cylinder, and topped it off with Lucas fuel injection.

The resulting car was called the Ferrari 312 F1. Though Ferrari’s John Surtees started the racing calendar with a win in the nonchampionship South African Grand Prix in January, he felt the 312 lacked power. During the official F1 season, he and team manager Eugenio Dragoni were constantly battling. Surtees would win in Belgium in June, but by September had left the team. Ludovico Scarfiotti’s victory in Italy accounted for Ferrari’s only other F1 win, as it finished a distant second to Brabham-Repco for the constructors title.

It did win the following year, but just once: Jacky Ickx’s victory in France. The Ferrari 312 F1 now ran four-valve heads that helped make it the first F1 Ferrari with more than 400 horsepower. Perhaps the season’s most noteworthy Ferrari moment came in June at the Belgium Grand Prix, where Maranello introduced an aerodynamic aid that caught everyone’s attention.

A number of cars had experimented with small wings on the nose and rear, but Ferrari mounted an aerofoil on supports high above the gearbox, just behind the cockpit. By September, at Monza, the wing could be controlled by the driver.

The Ferrari 312 F1 failed to score a victory in 1969. After the Italian Grand Prix, the eighth race of the 11-race season, Ferrari temporarily withdrew from F1 to concentrate on development of its new flat-12 engine. Luigi Chinetti’s North American Racing Team ran the cars in the final three races, the best finish a fifth by Pedro Rodriguez at Watkins Glen. In all, the 312 won just three races in four F1 seasons.