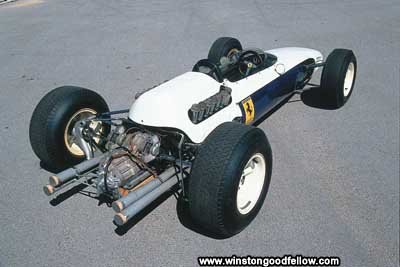 In practice for the 1963 Italian Grand Prix the Scuderia showed it was already looking ahead to the 1964 campaign. Alongside the V-6 Dino models that would actually contest the race, it tested a new car, the 158 F1. The name signified its 1.5-liter 8-cylinder engine, a 90-degree V-powerplant good for 210 horsepower, a more than 10 percent increase in output over the F1 V-6.

The chassis also followed new thinking. Instead of being Ferrari’s customary assemblage of tubes, it was a monocoque structure tailor-made for the engine and featured aluminum panels riveted to its framework. The V-8 had an extremely strong crankcase, so it was used a stressed member.

The 158 F1 didn’t capture a checkered flag until the ’64 season’s sixth race, but thereafter, team drivers John Surtees and Lorenzo Bandini were consistent podium finishers. It was enough to give Ferrari the constructors title over BRM, and for Surtees to win the World Driving Championship, the fifth Ferrari driver to do so. Surtees’ margin at the end was one point over fellow Englishman Graham Hill in the BRM.

Interestingly, Ferrari’s F1 colors for the final two races of the season switched from red to the blue and white of Luigi Chinetti’s North American Racing Team -- fallout from Enzo’s dispute with international racing authorities over the homologation of the 250 LM sports-racer.

The imbroglio did nothing to dim the luster of the season for Surtees. “The best of my years in Italy, as far as motor racing was concerned, was 1964, the year of the F1 world title with the Ferrari 158,” the seven-time motorcycle world champion recalled in Ferrari 1947-1997.

Though the 158 F1 ran again in 1965, Ferrari’s mainstay F1 machine that season was the Ferrari 512 F1. It had a 225-horsepower 1490cc “flat” 12 instead of the V-8. The car looked good on paper, but no rival was a match for Lotus and Jim Clark; they dominated to take the constructors and driver championships. The best the Ferrari 512 F1 could muster was two second-place finishes.

It would be 11 years before another Ferrari driver was F1 world champion.

Such technologies as the monocoque structure and the flat-12 demonstrated that Ferrari could welcome fresh ideas in racing. More difficult was dealing with the diverse elements tugging the company this way and that.

“Where Ferrari is concerned, I do have one regret,” Surtees noted. “I could have won another three world titles, in 1963, 1965, and 1966, when the cylinder capacity for Formula 1 was increased from 1500cc to 3000cc. But, for one reason or another, we ended up by giving away an incredible number of victories.

“[A]t Ferrari in those years [there were an] incredible number of activities, which led inevitably to energy being expended in different sectors. For example, when cars had to be prepared for Le Mans, Formula 1 was clearly overlooked, although we could compensate in part for our disappointments by the success of the sports prototype cars. I must say the Ferrari ‘P’ models, from the 250 to 275, P2 and P3, were wonderful cars to drive, very powerful, very well-balanced and a joy to race.”