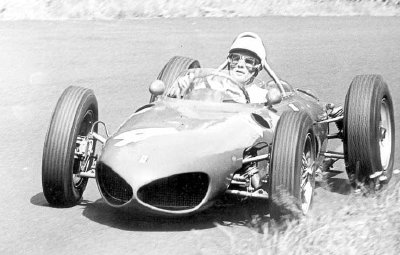 Ferrari’s single victory in the 1960 F1 campaign certainly didn’t reflect well on the Scuderia, but actions behind the scenes showed Enzo played the Grand Prix game better than anyone.

When, in October 1958, the FIA announced that starting in 1961 engine capacity would be reduced from 2500cc to 1500cc, the British teams protested loudly and threatened to withdraw. Ferrari simply shrugged his shoulders and had his men make a car to meet the new specifications.

Ferrari chief engineer Carlo Chiti and his crew once again drew on their Formula 2 experience to make their F1 car. The result, the Ferrari Dino 156 F1, was not unfamiliar in some regards: steel tubular chassis and independent suspension front and rear with double wishbones, coil springs and tubular shocks, and Dunlop disc brakes at each corner. But there was one characteristic somewhat foreign to Ferrari: The engine was in the rear.

Ferrari had actually debuted its first rear-engine F1 car in 1960, at the season’s first race in Monaco. It was essentially an experiment, and, driven by Richie Ginther, it finished a distant sixth. The car continued to race the rest of the year as largely a development exercise, then was modified over the winter by Chiti.

He swapped its 65-degree V-6 for a more-powerful 120-degree V-6. That propelled what would become one of the most distinctive of all Ferrari race cars. The Ferrari Dino 156 F1 had an evocative twin nostril “sharknose” and attractive tail bodywork that enclosed the engine, gearbox, and clutch. The car was beautiful, successful, and historic.

But the good fortune wouldn’t carry into 1962. In November 1961, Maranello was rocked by the infamous Purge, in which Chiti, team manager Romolo Tavoni, and a number of others left the firm. The 1962 F1 season was a disaster, exacerbated by the fact that the British teams were running strong V-8s. Ferrari didn’t score a victory and finished tied for fifth in a constructors championship won by BRM.

For 1963, the 156 got a revised body that traded the sharknose for a single-inlet form. New chief engineer Mauro Forghieri did his best to improve the mechanical package with a revised suspension and later, a semimoncoque chassis. Still, Ferrari scored just one victory, a win at Germany’s Nurburgring by former motorcycle world champion John Surtees. It finished fourth among eight constructors in a makes championship won by Lotus-Climax.