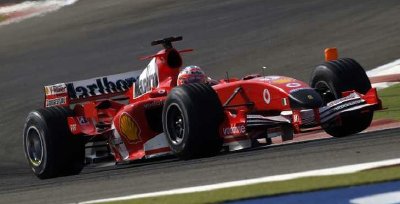 © Ferrari S.p.A Though it included many enhancements, the Ferrari F2005 did not prove to be a winner for Ferrari or Schumacher.

The demands of Le Grande Epreuve leave little time for savoring one’s triumphs, and so it was for Michael Schumacher and Scuderia Ferrari after their historic achievements of 2004. “It was definitely a fabulous season,” Schumacher told reporters in January 2005. “Not just because we were so successful, but also because of the atmosphere within our team, which is incredibly good ... Formula One is a team sport.

It’s about everyone working together, not a one-man show. The people at Maranello give us a solid foundation to work with when we’re at the race track ... It’s not a coincidence that we went for more than 50 races ... without having to retire due to technical failure. It shows how much effort is made and it shows Ferrari’s heart. The victories and titles belong to every single one of them.”

Schumacher paid that tribute soon after his 36th birthday, which some felt made him a bit elderly for Formula One. Asked if he was starting to feel his age, he admitted to the occasional small discomforts, but declared “All in all I feel very, very fit ... much younger than 36. I play soccer with my colleagues quite often, with people like [Team Renault driver] Fernando Alonso, who is 10 years younger ... and I don’t see much of a difference.” Unfortunately, Michael and the Ferrari team would see a difference in the 2005 season, and a dispiriting one at that.

A record 19 events were scheduled that year, including a second Grand Prix of China as the season finale. For the first two rounds, Ferrari’s car was the F2004 M (modificata), a mild update of the previous year’s all-conquering monoposto.

Then, starting with the April Bahrain GP, the Scuderia competed with the further-evolved F2005. Taking account of all the latest rules, it incorporated a good many aerodynamic refinements, such as a reshaped tail and a “winglet” added atop the roll hoop behind the driver, plus structural strengthening to satisfy stricter crash standards set by the FIA governing body. The gearbox was made more compact to suit, and there were numerous small changes to the rear suspension, brakes and electronics.

In addition, the 3.0-liter “053” V-10 was beefed-up to become the “055” engine, the aim being to double service life in line with a new mandate that the same engine be used for two consecutive races. Another new rule required using the same type of tires for an entire race -- no more switching between “dry” and “wet” compounds -- hence the rear-suspension changes.

The new regulations apparently aimed at fostering closer competition, a response to Schumacher’s utter dominance of the previous four seasons. But though many expected 2005 to be another Maranello cakewalk, it was anything but. Indeed, Ferrari was vexed at most every venue.

Tire problems proved both persistent and seemingly insoluable, and the competition had not been idle over the winter. Incredibly, Schumacher ended the campaign with only one victory -- at the June U.S. Grand Prix in Indianapolis -- and finished third in points with just 62, far behind the champion. Who was none other than young soccer buddy, Fernando Alonso, who amassed 133 points to best McLaren-Mercedes ace Kimi Raikkonnen (112). Schumacher’s teammate, Rubens Barrichello, finished eighth in the driver’s standings with 38.

Considering its season-long woes, Ferrari did well to claim third in the constructor’s championship with 100 points, trailing Renault’s 191 and runner-up McLaren-Mercedes’ 182. But that was scant consolation for team manager Jean Todt, who seemed ready to fall on a sword, judging by the apologies he made all season long.

The 2006 campaign offered hope for redemption, mainly because all teams basically had to start afresh. To lower track speeds in the interest of safety, the FIA mandated a new V-8 formula with engines of no more than 2.4 liters. Teams still had to use the same powerplant for two consecutive events, but were again permitted to make tire changes during a race.

Maranello responded with the aptly named 248 F1. Though it closely resembled the F2005 in size, layout, construction, and even appearance, Ferrari’s 52nd Grand Prix monoposto evidenced many improvements apart from its new “056” V-8.

Because the new formula made lower-speed aerodynamics more critical to handling and thus lap times, designers refined the shape and/or size of the air intake, engine cover, side pods, rear bodywork, chassis floor, even the rearview mirrors. Other refinements involved the cooling system, electronics, the fuel cell, spring and shock-absorber calibrations and -- again -- rear-suspension geometry.

While everyone contended with new cars in 2006, the Scuderia also had to deal with a significant personnel change, as Rubens Barchiello went off to join the Honda effort. But Schumacher’s new teammate would prove a shrewd choice: another young Brazilian hotshot, 24-year-old-Felipe Massa, who’d been waiting several years for just this chance and was eager to prove himself. That would be no easy task, as the formidable Fernando Alonso was again lead pilot for Renault and Kimi Raikkonnen was back for McLaren-Mercedes.

There were 18 events on the 2006 calendar. Alonso wasted no time picking up where he’d left off, winning six of the first nine contests and coming second in the remaining three. Schumacher managed but a trio of runner-ups in the season’s first half, but then returned to form with another victory in the U.S. Grand Prix, followed by wins in France, Germany, Italy and China.

But something had changed since Schumacher told the press, back in early ’05, “I’m someone who generally always tends to look ahead.” Perhaps it was the many frustrations of the 2005 series. Or maybe he was feeling more the little aches and pains he had acknowledged. Or perhaps, in looking ahead now, he didn’t like what he saw.

For whatever reason, rumors circulated all season that Michael would soon retire, and in early October, at Monza, he made it official even while celebrating a 90th Formula 1 victory. An era had ended.

But Schumacher would have one last glorious moment. Fittingly, it came at the season-ending Brazilian GP in late October. Alonso was only one point from a second straight driver’s championship, and a tire puncture ended Michael’s chances for a podium finish. Nevertheless, he drove like a man possessed.

As AutoWeek’s Nigel Roebuck related: “Rejoining [the field] stone last, almost a lap down on Massa, Schumacher maintained a searing pace to the end, with nothing at stake save his own pride, his own pleasure ... Most of those he passed en route to fourth place put up little fight [except for Kimi Raikkonnen], a fellow unusually devoid of sentiment ... How many, with the good life beckoning, would have tried a risky move against one as tough -- if fair -- as Raikkonnen?

As it was, Schumacher was not to be denied, and thus his final act in an F1 car was to pass the man who will replace him at Ferrari, the man whose signing, many believe, drove him out of F1 before he was ready to go.”

Massa won easily at Interlagos, to the delight of the hometown crowd, not to mention Jean Todt. Alonso came second, followed by teammate Giancarlo Fisichella, then Schmacher and Raikkonnen. For the season, Michael finished second in the driver’s standings with 121 points to Alonso’s 134. Massa was third with 80, besting Fisichella (72) and Raikkonnen (65). In the constructor’s derby, the Scuderia was doubtless relieved to close the gap with Renault, finishing just five points behind (201 to 206).

Schumacher did not disappear, gladly lending his considerable expertise to help the Scuderia prepare for 2007. Raikkonen’s arrival in Maranello was just one of many driver changes among the major teams that season, but Ferrari was also now without the services of technical director Ross Brawn, who was now off “fishing,” explained team manager Todt. That raised as many eyebrows as Michael’s absence from the cockpit.

As Nigel Roebuck noted, Brawn’s “near-telepathic relationship with Schumacher was responsible for so many strategic victories.” But his replacement was Mario Almondo, a man with “ample experience at Ferrari,” Todt said, “[though] he has different responsibilities and a different role than Ross. The Scuderia was regrouping for a new era. Other key changes included naming Aldo Costa to lead chassis development and Gilles Simon to oversee engine work.

There was another new car, logically designated F2007, and it, too, raised a few eyebrows. As Roebuck observed: “Against the flow of thought elsewhere, [it’s] a bigger, longer-wheebase car ... and other designers wonder why [Costa] has taken this route. Given Ferrari’s long association with Bridgestone (on whose tires all must run this year), is there something he knows that they don’t?"

Perhaps, but a dispute between the FIA and Michelin had ended the French tiremaker’s role as sanctioned Formula One supplier, which might have given Ferrari a leg-up on rivals new to the mandated Bridgestones.

Costa didn’t explain the 3.4-inch longer wheelbase, but did admit that aerodynamics for the Ferrari F2007 were “completely remodeled, above all the front suspension; the air inlets on the main body and the rear axle are tighter and more tapered, to benefit also from [a new gearbox] architecture.

We worked a lot on the chassis considering the new crash tests, which are much more severe ... The suspension has been revised [to accommodate the] new tires, while the gearbox has a new quick shift system ... We have also modified the [location and angle] of the radiator. As far as the rear suspension is concerned, it is continuing to evolve,” he said cryptically.

As for the engine, Simon it was basically the same 056 V-8, as the rules specified, but produced more torque near the 19,000-rpm redline thanks to revised valves, pistons, combustion chambers, and crankshaft.

The F2007 had the makings of a winner, but what about the drivers? Raikkonnen had been dissatisfied with recent Mercedes-McLarens, and had signed with Ferrari in hopes of getting a ride equal to his talents.

If the F2007 proved reliable, then he was, as Roebuck reported, “most watchers’ favorite to win the championship.” On the other hand, “Some doubt [he] is the man to motivate Ferrari as Schumacher did, and [some] also doubt that he will dominate Felipe Massa, who knows Ferrari inside and out and won twice last year. It helps that Massa is managed by the son of team boss Jean Todt. In the new era, goes the word, there will be no ‘team orders,’ no ‘No. 1 driver.’ Massa, sprightly, and confident, has his own hopes for 2007.”

Though the season is just underway as we write, it seems Ferrari might benefit from a little “sibling rivalry.” Raikkonnen promply won the season opener at Albert Park in Australia. Massa came back to take round three at Bahrain.

But in between, at Malaysia, both were humbled by Alfonso, who wields a McLaren-Mercedes this year. Of course, three races do not make an F1 championship, and there are 14 left on the 2007 card, so it remains to be seen whether the Scuderia can be as dominant as it was in the Schumacher years. One thing we do know: Ferrari will never stop striving to be the best in the most demanding of motorsports.

© Ferrari S.p.A. The Ferrari F2007 has already begun chalking up victories in the new season of Formula 1.