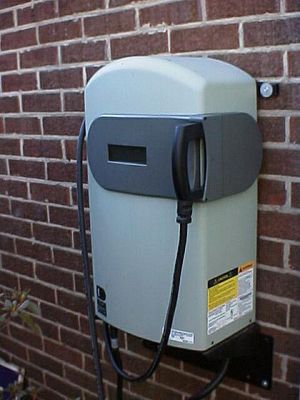 The charging station is hard-wired to a 240-volt 40-amp circuit through the house's circuit panel.

The charging system sends electricity to the car using this inductive paddle:

The paddle fits into a slot hidden behind the license plate of the car.

The paddle acts as one half of a transformer. The other half is inside the car, positioned around the slot behind the license plate. When you insert the paddle, it forms a complete transformer with the slot, and power transfers to the car.

One advantage of the inductive system is that there are no exposed electrical contacts. You can touch the paddle or drop the paddle into a puddle of water and there is no hazard. The other advantage is the ability to pump a significant amount of current into the car very quickly because the charging station is hard-wired to a dedicated 240-volt circuit.

The competing high-power charge connector is generally referred to as the "Avcon plug" and it is used by Ford and others. It features copper-to-copper contacts instead of the inductive paddle, and has an elaborate mechanical interconnect that keeps the contacts covered until the connector is mated with the receptacle on the vehicle. Pairing this connector with GFCI protection makes it safe in any kind of weather. Jon Mauney points out the following:

­An important feature of the charging process is "equalization." An EV has a string of batteries (somewhere between 10 and 25 modules, each containing three to six cells). The batteries are closely matched, but they are not identical. Therefore they have slight differences in capacity and internal resistance. All batteries in a string necessarily put out the same current (laws of electricity), but the weaker batteries have to "work harder" to produce the current, so they're at a slightly lower state of charge at the end of the drive. Therefore, the weaker batteries need more recharge to get back to full charge. Since the batteries are in series, they also get exactly the same amount of recharge, leaving the weak battery even weaker (relatively) than it was before. Over time, this results in one battery going bad long before the rest of the pack. The weakest-link effect means that this battery determines the range of the vehicle, and the usability of the car drops off. The common solution to the problem is "equalization charge." You gently overcharge the batteries to make sure that the weakest cells are brought up to full charge. The trick is to keep the batteries equalized without damaging the strongest batteries with overcharging. There are more complex solutions that scan the batteries, measure individual voltages, and send extra charging current through the weakest module.

In the next section, we'll walk through a conversion step by step.