Browse the article Did da Vinci really sketch a primitive version of the car? 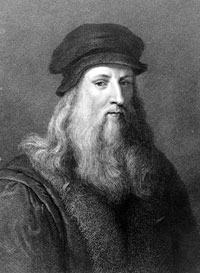 ­The term Renaissance man is used to describe a person who seems to know, and know how to do, nearly everything. He or she is skilled in multiple disciplines, and, being well-ed­ucated, has a broad knowledge of all sorts of subjects. When someone refers t­o another as a Renaissance man, you know that person really has his or her stuff together and would most likely be a great addition to your trivia team. A polymath is another word used to describe such a person; the word comes from Greek, meaning "having learned much."

The phrase Renaissance man comes from the period of the same name between the 14th and 17th centuries, the Renaissance. This is the point when historians agree civilization emerged from the Dark Ages and began a new period of intellectual enlightenment. Scholars and artists during these times took on all kinds of studies, including painting, sculpting, science and mathematics, engineering

Most consider Leonardo da Vinci (1452-1519), the Italian scientist, inventor and artist, the ultimate Renaissance man, and you'll often see him associated with the term. Leonardo was a master painter, and many of his works are recognized worldwide, including the

"Mona Lisa," the "Last Supper," and his sketch of the "Vitruvian Man." He was also a sculptor, an anatomy expert, an engineer and an architect, and his seemingly endless amount of ideas and inventions were extremely far ahead of their time. Most of his machines or gadgets were merely proposed and remain sketches on paper, but Leonardo also predicted a myriad of modern technologies, including the parachute, steam engine, tank, helicopter, airplane

But did the one-of-a-kind genius have the foresight to dream up the basic principle for the modern era's most influential mode of transportation -- the car? If so, what did it look like, and how did it work? Has anyone ever built a working model? Could this centuries old design save you money on gas? To learn about one of Leonardo's many quirky inventions, read on. 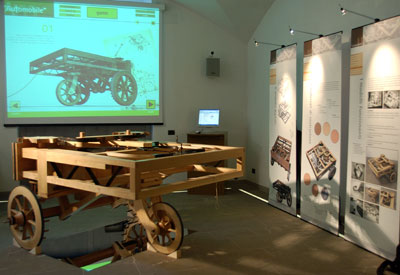 A working model of Leonardo Da Vinci's car on display at the Museum of the History of Science in Florence, Italy. This model, based on sketches drawn by L­eonardo, is considered by some to be the world's first self-propelled wagon.
Giuseppe Cacace/Getty Images

Although most historians agree the birth of the modern car came about in the late 19th century when two Germans, Gottlieb Daimler and Karl Benz, designed real, working internal combustion engines, experiments with moving vehicles weren't uncommon beforehand. As far back as 1770, a Frenchman named Nicolas Cugnot developed a steam-powered machine, the Fardier, which could crawl through the streets of Paris at about two miles per hour. It was more than 500 years ago, however -- sometime around the year 1478 to be more or less specific -- when Leonardo drew out his plans for the world's first self-propelled vehicle.

Unlike Henry Ford's Model T in the early 1900s, Leonardo's car wasn't designed for mass-production. It wasn't truly a passenger car, since it didn't even have a seat. The vehicle was actually designed as a special attraction for Renaissance festivals, meant to instill wonder and awe in attendees. Like many of Leonardo's sketches, however, the car remained on paper throughout his lifetime -- we can only speculate that the machine was either considered too dangerous to operate or the inventor didn't have adequate materials to build it.

In 2004, Paolo Galluzzi, director of the Institute and Museum of the History of Science in Florence, Italy, oversaw a project to finally build a working model of Leonardo's invention. Although there were several attempts to build the car during the 20th century, each one had failed due to unclear instructions in Leonardo's sketches. Experts originally believed two leaf springs, the simplest form of the spring typically used for automotive suspensions, somehow powered the vehicle. Closer inspection eventually revealed the power came from bigger, coiled springs located in tambours, cylindrical drum-like casings, inside the car's frame.

Galluzzi and a team of engineers spent four months designing a digital model to make sure they knew the machine would work. Leonardo's designs called for a car 5 feet 6 inches long (1.68 meters) and 4 feet 11 inches wide (1.49 meters), which they built. However, the designers in Florence worried about the machine being too dangerous -- once a brake is released, it can travel for about 130 feet (40 meters) -- so they built an additional one-third scale model for testing and demonstration.

The machine works like a robot or a wind-up toy simply by rotating the wheels opposite of their intended direction, which winds up the springs inside and gives it power. The frame and many of the car's clockwork-like mechanisms, such as cogs, were made from five different types of wood.

The car also has programmable steering, which is achieved by arranging wooden blocks between gears at pre-set locations, and, oddly enough, it can only turn right. Still, Leonardo must have once again been looking forward to Florence's one-way streets. Although the contraption was allegedly designed for entertainment, Galluzzi's model proved not only that Leonardo's car worked, but the Renaissance man was centuries ahead with yet another influential invention.