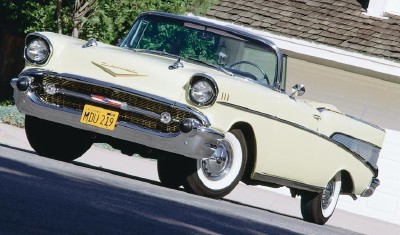 Exuberant 1950s styling is just one reason the 1957 Chevrolet Bel Air is a collector's dream today.

Without question, the new 265 V-8 of 1955 was one of Detroit's milestone engines. Though designed for efficiency and low unit cost, it was really one of those "blue sky" projects that comes along only once or twice in an engineer's career.

As principal designer Ed Cole later recalled: "I had worked on V-8 engines all my professional life. I had lived and breathed engines. [Engineer Harry F.] Barr and I were always saying how we would do it if we could ever design a new engine. You just know you want five main bearings -- there's no decision to make. We knew that a certain bore/stroke relationship was the most compact. We knew we'd like a displacement of 265 cubic inches...And we never changed any of this. We released our engine for tooling direct from the drawing boards. That's how wild and crazy we were."

They had reason to be enthusiastic. The 265 boasted low reciprocating mass allowing high rpm; die-cast heads with integral, interchangeable valve guides; aluminum "slipper" pistons; a crankshaft of forged pressed-steel instead of alloy iron -- and much more.

Best of all, it weighed less than the old six yet was far more potent, initially pumping out 162/170 bhp (manual/Powerglide) in standard tune or 180 bhp with optional Power-Pak (four-barrel carburetor and dual exhausts).

­Of course, it could give a lot more -- and did for '57 when bored to 283 cid and offered with optional fuel injection. Chevrolet developed a new 348-cid "big-block" for 1958 and beyond. It was a good one, but the small-block remains one of the best-known, best-loved engines of all time, earning Chevy a performance reputation the way sixes never could.

At just under $200, Powerglide became an increasingly popular option in the '50s -- a smooth operator well-suited to all but high-power models. Standard three-speed manual and extra-cost stick-overdrive were offered throughout the decade, and an all-synchromesh four-speed manual came on board in 1959.

Late '57 brought a second automatic option, three-speed Turboglide, but this was complex, costly, and short-lived. Powerglide would be the Chevy automatic until the mid-'60s.

The 1955-57 Chevys are coveted collectibles now, and styling has as much to do with this as engineering. Design principals Clare MacKichan (then Chevy studio chief), Carl Renner, Chuck Stebbins, Bob Veryzer, and others worked under Harley Earl's dictum of "Go all the way, then back off."

Though the '55 didn't reach showrooms looking like their fanciful renderings, it wasn't far off, wearing Earl's hallmark beltline "dip," wrapped windshield, and a simple eggcrate grille inspired by Ferrari. The last became broader, brighter, and more conventional for '56 in line with buyer tastes.

With all this, plus attractive prices that weren't changed much from '54 (mostly in the $1600-$2260 range), Chevy led the industry in a record Detroit year with over 1.7 million cars, a new make high and a quarter-million better than Ford.

An interesting '55 newcomer was the Bel Air Nomad, America's first "hardtop wagon." A Carl Renner idea adapted from his 1954 Motorama show Corvette, the Nomad didn't sell that well, mainly because two-door wagons were less popular than four-doors, though water leaks were also a problem. Then, too, it was relatively expensive ($2600-$2700). Had anybody else built it, the Nomad probably would have seen minuscule production, but a respectable 8386 were built for 1955, 7886 for '56, and 6103 for 1957.

Chevy called its '55 "The Hot One." Ads said the '56 was even hotter. It was. The old Stovebolt, now offered with manual shift only, was up to 140 bhp, while the V-8 delivered up to 225 bhp with Power-Pak. A $40-million restyle made all models look more like Cadillacs, and four-door hardtop sport sedans joined the Two-Ten and Bel Air lines.

Despite a broad industry retreat, Chevy managed record market penetration of close to 28 percent on just 88 percent of its '55 volume -- about 1.5 million units. Ford repeated at around 1.4 million.

Ford (and Plymouth) counterpunched with all-new styling for '57. Chevy had to make do with another substantial facelift, but it was deftly done and quite popular. In fact, this Chevy is still regarded by many as the definitive '50s car. There were now eight engine choices, up three from '56, including no fewer than six 283 V-8s with 185 up to 283 bhp.

Properly equipped, the 1955-57 Chevy was a formidable track competitor. Before the Automobile Manufacturers Association voted to withdraw from organized racing in June 1957, Chevy did very well in NASCAR and other stock-car events. At that year's Daytona Speed Weeks, Chevy took the first three places in the two-way flying-mile for Class 4 (213-259 cid); in Class 5 (259-305 cid) it took 33 out of 37 places, the fastest car averaging 131.076 mph. Chevy also won the 1957 Pure Oil Manufac­turers Trophy with 574 points against 309 for runner-up Ford.

For more on Chevrolet cars, old and new, see: