Should you wear sunglasses while driving in the rain? 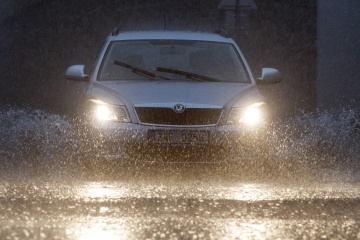 Sunglasses can actually help improve your sight when driving on rainy days like this.
Petr Topic/isifa/Getty Images

It's annoying, although totally understandable, that a sudden rainstorm has the ability to bring your commute to a total standstill. The streets get slippery, the sky gets darker, the windshield gets smeary, and you can't see more than a few feet in front of your headlights. There's not much you can do, short of moving to drought-stricken California.

What about simply putting on your sunglasses when the rain starts to fall? Sounds weird, right? Snopes, the online expert in urban legends, has collected and archived several chain e-mails claiming that donning sunglasses (any model, they say) will make the storm magically vanish. Sunglasses can enable drivers to see as if the rain isn't even there, will reduce the glare from passing cars and will work in both daylight and low-light nighttime conditions. Putting on sunglasses when it's raining at night, in other words, will return a driver's visibility to normal levels, according to the myths. And if these claims aren't true, then there are potentially a whole lot of drivers on the road who are unintentionally making their vision a whole lot worse.

As ridiculous as this strategy sounds, there is some truth to it. First and foremost, totally disregard the suggestion to put on sunglasses at night. It's already too dark to make it any darker, and contrary to the claims, sunglasses won't have enough of a positive effect on the rainfall to offset the fact that they're making the overall visibility much worse. However, wearing sunglasses during daytime rainstorms is OK (as long as the sky isn't very dark), and sunglasses may also help increase contrast in mild to moderate fog.

It must be noted that, contrary to the urban legend's claim, not all sunglasses will work to increase visibility in the rain. Optometrists say that only sunglasses with polarized lenses will offer any benefit, because they work in a very specific way. Polarized lenses help prevent light from scattering when it bounces off a reflective surface, like the glare you see when rain bounces off the road or falls in front of another car's lights. Sunglasses with polarized lenses reduce that effect, making it easier to see what's going on without being distracted or blinded by unpredictable light glare. Fog and light can have a similar effect on the field of vision. As long as these recommendations are followed, wearing sunglasses in the rain can actually be helpful.