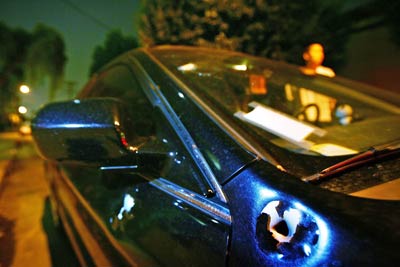 Driving a car is stressful -- it's inherently dangerous because even if you're the safest driver in the world, there are a lot different variables that you can't predict, like weather, traffic, accidents, and road work. And what about all those other people on the road? Some of them aren't just bad drivers, they're engaging in risky behavior. Some of them even do things specifically to make you angry or prevent you from getting to where you need to go.

That's the thought progression someone might have just before switching into road-rage mode, leading a driver to make irrational decisions very quickly. All of a sudden, you might be thinking: They need to know that what they're doing is dangerous and stupid, and you should show them. In fact, you should punish them.

There's no denying that driving can be a risky and emotional experience. For many of us, our cars are an extension of our personality, and it might be the most expensive possession we own. When we drive, we're aware that there's potential for injury and property damage. Driving might be an expression of freedom for some, but it's also an activity that tends to increase our stress levels, even if we're not aware of it at the time. Driving is also a communal activity. You might think of driving in terms of your own individual experience. But once you pull into traffic, you've joined a community of other drivers, all of whom have their own goals, fears and driving skills. Psychologists Dr. Leon James and Dr. Diane Nahl say that one factor in road rage is our tendency to concentrate on ourselves while dismissing the communal aspect of driving. It's very easy to perceive another driver's actions in terms of how it affects us, which in turn makes it easy to transition into anger [source: James, Nahl]. Once an expert witness to Congress on traffic psychology, Dr. James, known as "Dr. Driving," believes that the core cause of road rage isn't due to traffic jams or more drivers on the road -- but how our culture views aggressive driving [source: Dr. Driving.org]. In our culture, children learn that the normal rules regarding behavior and civility don't apply when driving a car. They may see their parents engage in competitive-driving behaviors, maneuvering the car with multiple lane changes or traveling at high speeds in a rush to get to a destination. Some popular films and television shows portray aggressive driving as a positive, or at the very least, an exciting activity. To complicate matters, for years pop psychologists suggested that the best way to relieve anger and stress was to vent your frustration, essentially giving into and feeding your negative emotions. However, psychological studies show that venting doesn't help relieve anger at all. In a road rage situation, venting can help escalate an incident into a violent encounter. Americans also tend to view a person who backs away from confrontation as a coward, creating a sense of pressure on a driver to not give up any ground even when no one is judging him. With that in mind, it's no surprise that violent encounters happen occasionally. Almost everyone is predisposed to engaging in irrational behavior while driving -- Dr. James even goes so far as to say that most people are emotionally impaired when they drive [source: James]. The key, psychologists say, is being aware of your emotional state and making the right choices, even when you are tempted to act out emotionally. In the next section, we'll examine some of the factors that contribute to road rage. ­

Neurologist Paul MacLean proposes that the human mind is the combination of three brains, one of which is known as the reptilian brain and is similar to the brain found in reptiles. This part of the human mind, which consists of the brainstem and cerebellum, is responsible for our sense of survival and the fight-or-flight reaction we have to fear and stress. Road-rage incidents stem from the stimulation of the reptilian mind -- a driver experiencing road rage feels threatened and responds aggressively to ensure survival. MacLean states that the reptilian brain is inflexible, compulsive, ritualistic and incapable of learning from previous experience [source: Kheper].