10 Ways to Avoid Overheating Your Truck 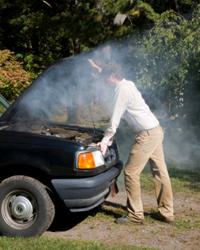 It should go without saying that you need to let your engine cool down thoroughly before digging your hands in there.
Thomas Jackson/The Image Bank/Getty Images

Again, this falls under the category of "routine maintenance" but it certainly is deserving of additional recognition. Checking hoses and belts is a step that's frequently overlooked or forgotten, despite its simplicity. And this is yet another engine overheating cause that doesn't differ all that much from the way it would be handled in a car. Just because a truck is bigger, stronger, manlier or "heavy-duty," it doesn't mean its parts can't break or wear out. The belts and hoses are still made of rubber, which can crack, fray, leak or rot. A truck's rubber parts might be bigger than the corresponding components in a car, scaled to suit a larger engine, but they're essentially the same.

So when you get under the hood to check things out, you're not just looking for leaks. Check the edges of the belts for fraying or wear, and while you're at it, check the tension. If a belt's tension isn't correct, it'll make the alternator work much harder than necessary, as it tries unsuccessfully to transfer power to other components. So the alternator simply runs more to get the job done and all that wasted effort (and extra friction) creates extra heat. Extra heat in the engine bay raises the overall temperature of the bay, which then contributes back to an overall rise in engine temperature. As the loose or worn belts keep working, the problem keeps building and the temperature keeps rising. And then, sooner or later, the engine overheats. As the engine overheats, pressure builds in the cooling system, which will put added pressure on the hoses. (It's generally a bad idea to let the alternator and other accessories work too hard, anyway, because those components can wear out and cause a domino effect of failures throughout the system.)

If your engine temperature gauge is rising rapidly but there are no obvious causes (or it's maybe just that your air conditioner is somewhat less crisp than usual), you might want to give the entire bay a thorough checkup. It should go without saying that you need to let your truck cool down thoroughly before digging your hands in there, but if you're hauling all your worldly possessions in an overheating truck that's in desperate need of a new $25 rubber belt, we'd rather be safe than silly.