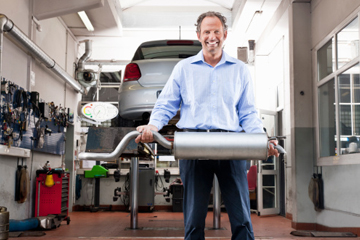 The muffler is another key part of your car's exhaust system.
Matthias Tunger/The Image Bank/Getty Images

We discussed the various pipes first, because they're the most visible and prevalent components of the exhaust system, and because they're all over the place. But the exhaust system really starts at the exhaust header (also known as the exhaust manifold). The header looks like a series of adjacent tubes stuck together (though it's often made of heavy-duty cast metal). It collects the exhaust directly from the engine, so it's designed so each opening mates up with one of the engine's exhaust ports, with flanges that form a tight seal to prevent exhaust from escaping. From here, the exhaust begins its flow through the various pipes and other components.

The gaskets that are fitted between each pipe play a very important role. It's difficult, if not impossible, to form a flawless metal-to-metal seal, so gaskets are sandwiched between each connection to prevent the poisonous gases from escaping prematurely. They're made of fiber or other heavy-duty, heat resistant materials, which have just enough flexibility to compress slightly when the pipes are clamped tightly together. This helps form a tight seal.

The muffler is another key part of the exhaust system. It looks like a large round or oval chamber (usually, but not always, found near the back of the car). That chamber has a very complex design, though -- it's responsible for silencing most of the engine's noise, even though it has to allow the exhaust to continue flowing smoothly. A series of chambers and tubes, filled with rock, wool, or synthetic fibers, absorbs and controls the noise. And that's not all -- the muffler must be reasonably resistant to damage, corrosion and heat retention. The resonator is a secondary or substitute sound elimination component, used to augment the muffler, or in cases where space is at a premium it might even be used instead of a muffler.

Catalytic converters, which became commonplace in the 1970s, are the primary and most efficient means of reducing the level of toxins in a car's exhaust. The innards of a catalytic converter (or "cat") are coated with metals. Different types of catalytic converters use different combinations of platinum, palladium and rhodium. Before the exhaust reaches the cat, it contains a potent, super-toxic combination of carbon monoxide, nitrogen oxide and hydrocarbons. (When you take your car for its emissions test, these are the chemical levels that are being tested.) When these poisons come into contact with the metals coating the inside of the cat, a chemical reaction takes place that makes the exhaust gases less harmful. As the exhaust passes through the cat, the level of chemicals should be reduced enough to comply with government regulations.

We already talked about gaskets, but the exhaust system requires other basic pieces of hardware. Flanges generally serve the same purpose as gaskets, but these are made of metal (and are sometimes formed right onto the end of a pipe). Assorted clamps and brackets mount the exhaust pieces together and hold them to the vehicle, and exhaust hangers literally hang the pipes from the underbody of the car, with enough strength to keep them in place but also enough flexibility to withstand movement caused by driving. And last, but not least are the heat shields: Metal (sometimes insulated) plates that are used as an extra barrier whenever hot exhaust parts are particularly close to another part of the car or directly below the passenger compartment.