How do exhaust headers work to improve engine performance? 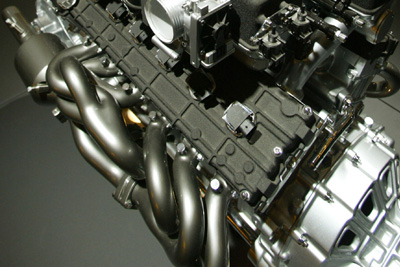 Headers are one of the easiest bolt-on accessories you can use to improve an engine's performance. The goal of headers is to make it easier for the engine to push exhaust gases out of the cylinders.

When you look at the four-stroke cycle in How Car Engines Work, you can see that the engine produces all of its power during the power stroke. The gasoline in the cylinder burns and expands during this stroke, generating power. The other three strokes are necessary evils required to make the power stroke possible. If these three strokes consume power, they are a drain on the engine.

The idea behind an exhaust header is to eliminate the manifold's back pressure. Instead of a common manifold that all of the cylinders share, each cylinder gets its own exhaust pipe. These pipes come together in a larger pipe called the collector. The individual pipes are cut and bent so that each one is the same length as the others. By making them the same length, it guarantees that each cylinder's exhaust gases arrive in the collector spaced out equally so there is no back pressure generated by the cylinders sharing the collector.