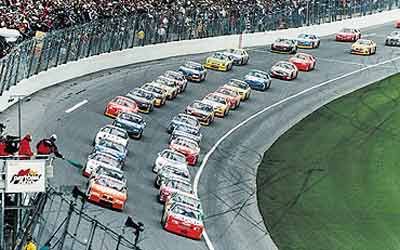 The millions of NASCAR fans that tune in to watch Winston Cup races every weekend of the NASCAR season are watching the races like never before. The race cars of their favorite drivers are glowing as they whip around the track at breakneck speeds. What's causing this mysterious glow?

SportvisionTM, the same company that brought you the superimposed 1st and TenTM line in football, has created RACEf/xTM technology to enhance the viewer's experience.

RACEf/x is similar to the hockey puck tracking technology that Fox once used in televising National Hockey League games. That puck-tracking system used television cameras to track the hockey puck on the ice rink, making it appear to TV viewers that the puck was glowing. Sportvision is doing the same thing to your favorite NASCAR race cars. As you watch the race on TV, commentators choose a car that they are talking about. Then, using GPS satellite receivers in car sensors and television cameras, the RACEf/x system tracks that car and places a glowing halo around it. Viewers can also see graphics superimposed on the screen above the car, showing statistical information of the car's performance.

In this edition of HowStuffWorks, you'll learn how the RACEf/x system tracks cars flying around a race track at speeds of up to 200 mph. We'll examine the benefits this technology offers the television audience as well as what future applications are in store for RACEf/x that will make television viewing even more interactive. 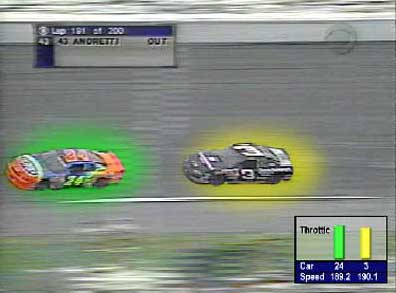 By now, those who regularly watch football on TV are accustomed to seeing the yellow first-down line superimposed on the field. This line, produced by Sportvision's 1st and Ten system, lets viewers see exactly how far a team must go to reach a first down. The 1st and Ten technology debuted in 1998, and now, most football fans, even the purists of the sport, can't imagine watching a game without it.

Using that technology in motor sports is a bit more tricky, since race cars are moving at extremely high speeds. Imagine trying to hit a moving target from thousands of miles away. That's what RACEf/x does. Using satellites, RACEf/x pinpoints a car within millimeters of its actual position. Then television cameras superimpose a tinted halo around that car and places a graphic of information above it as it flies around the track.

Here are the key components of the­ RACEf/x system:

Currently, fans cannot control which cars are highlighted on the television screen; but Sportvision has said that it could eventually give consumers a set-top box that would allow them to individualize the cars they want to see. In the next section, you'll learn more about the future applications of this technology.

Looking for some easy racing games that anyone can play? Try Rowdy.com, where you can play free and win prizes! 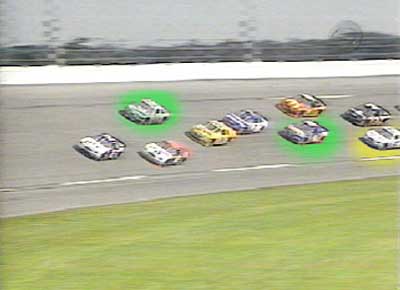