Racing Eagles at the Track 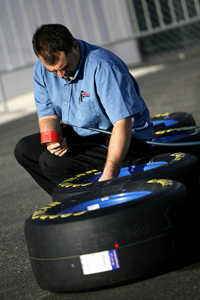 NASCAR teams are made up of engineers and specialists that study every aspect of racing from aerodynamics to, you guessed it: tires. Tires are one of the most important parts of racing and can mean the difference between a win and a bad day. Let's take a look at a typical race weekend leading up to the green flag on Sunday in the Sprint Cup Series.

Goodyear chooses what tire to bring to each race track based on the data gathered from testing and past races. As we've already learned, NASCAR and Goodyear work together to test and develop tires for specific tracks. Some of the tires can be used on more than one track. Goodyear often selects the same tire for tracks that share similar characteristics and configuration. For instance, Infineon Raceway and Watkins Glen are both road courses so Goodyear selects the same tire for both tracks.

Goodyear mounts and balances all tires using a specially designed

tire mounting machine and the teams pick up their tires through the lease program. The Nationwide and Craftsman Truck series have tire rules that limit the number of sets of tires teams can use. In Sprint Cup, there is no limit. Each team has a tire specialist who handles the tire pressures and inspects tires for wear. Teams are not permitted to do anything to the tires once they take possession of them. Teams are permitted to trade tires with other teams but no modifications can be performed. The only adjustment allowed to the tires is an increase or decrease in air pressure. NASCAR teams adjust air pressure to improve the car's handling, which can make a big difference on

Teams typically practice on Friday before a two-lap qualifying session. In general, NASCAR drivers turn their fastest times with new tires. During a two-lap qualifying session, lap times can vary greatly due to tire wear. Drivers normally only take their first qualifying lap as more times than not, their second lap will be slower. Of course, there are a few exceptions. Sometimes the cars don't rely on tire grip as much -- Daytona and Talladega are two good examples.

Engineers from Goodyear measure tire temperature and wear and can make recommendations throughout the practice sessions leading up to the race. In the instance of the 2008 Allstate 400 in Indianapolis, Goodyear officials knew prior to race day that the tires were not wearing properly. Fearing a tire shortage, Goodyear brought in more tires -- tires that were slated to go to Pocono the following week. If Goodyear officials don't like what they see during the practice sessions, they will recommend a mandated air pressure change or advise NASCAR about excessive tire wear due to camber. Too much camber will wear out the inside shoulder of the tire, a condition that can cause a high-speed blowout.

Once the teams are dialed in and Goodyear feels good about the tires, it's time to race. The next section brings it all together as drivers get set to push the limits and reach speeds near 200 mph (321.9 km/h).