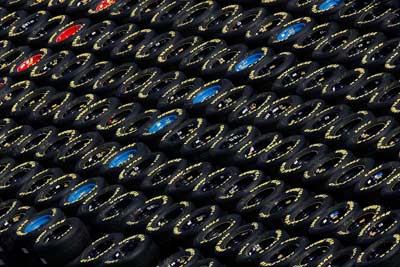 That's a lot of tires -- and Goodyear can identify each one thanks to an RFID chip embedded in every tire.
Chris Graythen/Getty Images for NASCAR

Goodyear and NASCAR work together to develop tires for each of the three NASCAR series. When Goodyear tests tires, they select certain drivers from each of the four manufacturers in NASCAR and pick tracks they would like to use to acquire data. These drivers bring their own cars and teams and run lap after lap at the designated tracks. Tire engineers record tire temperature and other data to take back to the manufacturing plant where chemists will determine the proper compound to use when they make new tires. A tire compound is a mixture of rubber and polymer chemicals that give tires strength and durability while providing exceptional grip.

Once back at corporate headquarters in Akron, Ohio, Goodyear engineers decide what compound to use for certain tracks. Each racing surface is unique, so Goodyear develops tires that match each venue. For example, tires that have exceptional grip on a rough concrete-surfaced track, like Bristol Motor Speedway in Tennessee, may have poor grip on a smooth asphalt track, like Las Vegas Motor Speedway. It is important for Goodyear engineers to find the right combination in order to build a competitive tire.

Prior to the 2006 racing season, NASCAR teams purchased tires from Goodyear at each race event. Some of the well-funded teams, such as Hendrick Motorsports, Rousch-Fenway Racing (Rousch Racing then) and Joe Gibbs Racing were purchasing more tires than they could use during a race weekend and would often use their excess tires during testing throughout the season. NASCAR officials believed the big teams were getting an unfair advantage through this surplus tire testing method so they implemented a leasing program at the beginning of the 2006 season. Since then, Goodyear has leased tires to every NASCAR team during race weekends. Once the tires are used, the teams return them to Goodyear for recycling. In order to keep track of the tires, Goodyear implants small radio frequency identification, or RFID chips, inside each tire. In addition to race day tires, Goodyear also leases 200 tires to Sprint Cup, 160 tires to Nationwide Series teams and 120 tires to Craftsman Truck Series teams to be used on non-sanctioned tracks for tire testing. The RFID chips allow NASCAR to monitor the testing.

In the past, tire testing was seen as a nuisance by some teams. But in an attempt to equalize the competition and lower costs, NASCAR continues to limit the number of tire tests that teams can conduct throughout the season. Tire tests are suddenly a hot commodity as testing is now at a premium.

By now, you should understand just how important tire testing is to the sport -- but NASCAR drivers want to race, and fans want to watch their favorite drivers push the limits. Up next, we'll go to the track and find out how the teams prepare for race day.

Testing Policy to be Reviewed as a Result of Indy

During the 2008 running of the Allstate 400 at Indianapolis Motor Speedway, improper tire wear forced NASCAR to throw several competition caution flags throughout the entire race. At no point in the race were the cars allowed to drive more than 18 green flag laps without a tire change. As a result, Goodyear will conduct a large-scale tire test in the fall of 2008, as well as in the spring of 2009. The tire incident has also raised questions as to whether NASCAR should have an in-house tire testing team. A tire testing team would allow Goodyear the ability to develop tires for specific tracks. As it stands, Goodyear relies on the few teams they select for testing and only a handful of tracks in the Sprint Cup Series schedule.

No matter what happens, the 2008 Allstate 400 will surely change the way tires are tested and developed from this point forward.